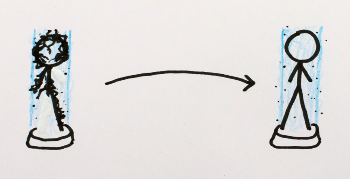 Fig. 1: Quantum information is transmitted from one end to another, while the original copy is destroyed.
"It is not dissimilar to a facsimile machine, if you have any knowledge of late 20th-century technology."
— SAYER, episode 70
Advertisement:

Often recognized via Fridge Logic on the part of the audience, who start wondering how teleportation might "really" work. Many scholarly works, such as The Age of Spiritual Machines by Ray Kurzweil, postulate that the only way teleportation could actually work is if the original copy is destroyed (read: killed). Put another way, every time you see a Star Trek character use the transporter, that character is actually being killed, meaning the original Kirk, Spock, etc. died years before!

Sometimes this is the main focus of a story, and the morality of teleporting in this manner is examined for the sake of drama (or, potentially, comedy). Might result in Cloning Blues when a character finds out that the original "them" is dead. Characters might refuse to teleport because they don't think of themselves as an Expendable Clone.

A way out of this conundrum is sometimes used in settings where souls are present. If a person's soul a) exists, and b) is treated as their true "self" and simply "wearing" the body, then the issue of the original person's death is entirely circumvented if you can simply move the soul from one place to the other and build a new body around it. Alternatively, the original dies just like always, but now you also end up with multiple copies of them in the afterlife and/or hauntings by vengeful ghosts.

A subtrope of Twinmaker, where the twinmaker is teleportation. Contrast Resurrection Teleportation, which is deliberately using one's death as a means of teleportation.

Not to be confused with Weaponized Teleportation, where teleportation of this or any other sort is used offensively or defensively; or with Tele-Frag, where the damage is done at the destination, with the teleported subject appearing inside another person, creature, or object.

Also, while many sci-fi TV shows or movies effectively have this trope as Fridge Horror but often never acknowledge it, there is a form of technological teleportation that can avert this trope: wormhole-based teleportation. Since wormholes basically punch a hole in space between two distant points that can be traversed very quickly, there is no copying or molecular breakdown involved. For that trope, see Our Wormholes Are Different.