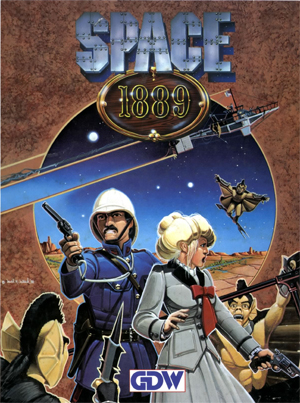 Space 1889 is a Steampunk Tabletop Roleplaying Game by Frank Chadwick, and published first in 1988 by Game Designers Workshop, then by Heliograph Inc.

It is set in an Alternate Universe Victorian era where the scientific theories of the day are true; a luminiferous aether fills the depths of space, which is what people use to travel from world to world in Cool Airships. Indeed, the game describes itself as Victorian-era science fiction. As the game is set in an alternate-Victorian era, all the great powers have colonies on the other planets.

There was also a 1989 Computer RPG, Mars 1889, which is mostly forgotten today. Savage Worlds also has a reedition called Red Sands with Clockwork Publishing developing a version for the Ubiquity Engine (while also supporting the SW version).