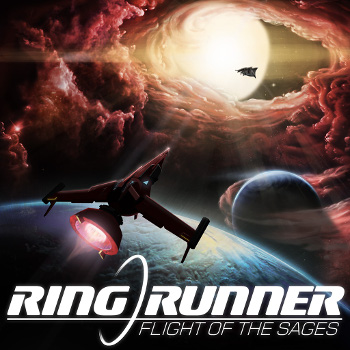 Ring Runner: Flight of the Sages is a top-down space shooter with RPG Elements that was developed over the course of six years by brothers Paul and Enrique Dryere of Triple.B.Studios, originally based on their novel, Ring Runner: Derelict Dreams. It was released on Steam on July 19th, 2013.
Advertisement:

Far in the future, humanity has spread across the universe as part of the Consortium of the Inner Rings, an empire ruled by the Sophians. One of the groups of people in the CIR are the Sages, Reality Warpers who can alter quantum space to achieve effects that look like magic. Because of their power the CIR has decreed that Sages are too dangerous to be continued to allowed to exist.

The story begins with a nameless protagonist waking up in a space station's medbay on an operating table. A Neuro-HUD named Nero has been implanted into their brain. Sirens suddenly sound, and the protagonist seizes a ship and escapes. They then search for answers on who they are. As they make their way through the universe, they discover that the reason they were in the medbay in the first place was to get surgery to become a Sage.

The main selling point of the game is the massive amount of customization available to the player. Ships are sorted into five archetypes: Arsenals, Casters, Fighters, Grapplers, and Rogues. Many ships mix and match aspects of archetypes, letting you pick whatever combination you want. The creators have stated that they wanted new ship abilities to be "side-grades" instead of straight upgrades. For example, you might replace an energy hammer that can knock back enemy projectiles with a giant magnetized drill that draws enemies towards it, or choose between a launcher that fires missiles in a circle around your ship, a missile that makes the target slow down, or a passive ability that makes missile attacks heal you.

Ring Runner: Flight of the Sages contains examples of the following tropes: