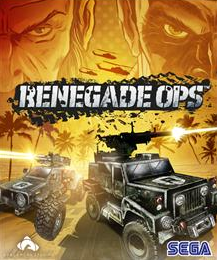 Renegade Ops is a top-down Twin-Stick Shoot 'em Up developed by Avalanche Studios, creators of the Just Cause series and published by SEGA. It was released on PlayStation Network on September 13th, 2011, and on Xbox Live Arcade the following day. After a series of delays, it also came out on Steam for the PC on October 27th. As the story goes, one day Avalanche were toying with the idea of depicting Just Cause's over-the-top action and vehicle combat as a top-down shooter. The result was apparently awesome, as they decided to make a game out of such.

It's the present day, or maybe Next Sunday A.D.. A power-hungry madman by the name of Inferno has firebombed defenseless Catalonia City- and promises to an assembly of world leaders that he will torch other cities if control is not ceded to him. The leaders want to negotiate. But one General Bryant believes that Inferno is not the sort of man to be negotiated with. The leaders shut Bryant down, so he decides to take matters into his own hands, tossing his medals onto a desk in disgust.

Enter The Renegades: A team of four paramilitary specialists, each armed with a distinctive, heavily armed combat vehicle. Acting outside the bounds of international law, Bryant leads this team on a mission to stop Inferno's mad scheme and smash his military machine, one gratuitous explosion at a time.

The game can be played alone, or in two-player split-screen or four player online co-op. You earn Experience Points as you play, even if you do not complete a mission. A Level Up grants Upgrade Points, which are then spent on a series of upgrades that affect the offensive, defensive and tactical abilities of each character's vehicle. Up to four upgrades can be equipped at any one time.