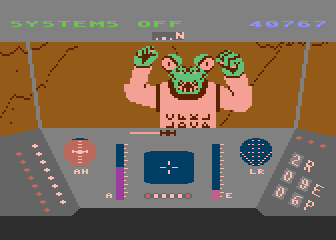 Rescue on Fractalus! is a 1984 game by Lucasfilm Games—one of the first games created by the young company.

You are an air pilot on a search-and-rescue mission to rescue downed spacemen stranded among the jagged mountains of planet Fractalus. Your task is to track down the crash-landed spaceships, land nearby and let the pilots into your ship, all while dealing with anti-aircraft turrets and nasty kamikaze UFOs. At the time of its release, the game awed the players with its fractal-based, real-time kinda-3D graphics.

One of the most memorable and infamous things about the game was that, sometimes, aliens would disguise themselves as human pilots. When such an impostor approached your ship, instead of the familiar knock-knock of a pilot wishing to be let in, you'd be treated to the sight of an alien jumping onto the cockpit window and smashing it, killing you if you didn't reactivate your shields fast enough. This was considered really frightening (especially since the manual only hinted at it), making Rescue one of the first truly scary video games.