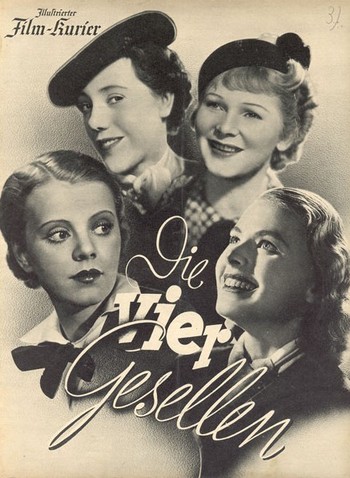 Four young women—Marianne, Kathe, Lotte, and Franziska—graduate from graphic design school. Their teacher Stephan, himself quitting the school to go work in advertising, is in love with Marianne and asks her to marry him. Marianne feels the same way about her teacher, but she doesn't want to be dependent on a man, so she turns him down.

Unfortunately it proves difficult to find work as a young woman graduating from art school. Marianne manages to get a crappy job with a lingerie company, but her friends are doing even worse: Kathe and Lotte are unemployed and broke and Franziska, trying to make it as an artist, can't sell a painting. The four of them, lacking better options, decide to go into business for themselves and start their own company, "The Four Companions". They struggle, but eventually they land a contract with a cigarette company. However, both Kathe and Lotte have fallen in love...

Marianne was played by a young Swedish ingenue named Ingrid Bergman. Joseph Goebbels hoped to make her into a big star, but this was the only film Bergman made in Germany before she left for Hollywood, party because she didn't like the look of Hitler's Germany and partly because Hollywood was the big time.