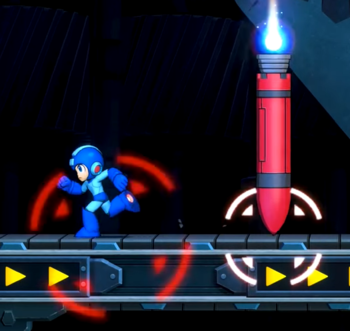 You really don't want to shop at this Target.
A video game trope, most often seen in platformer bosses. The enemy will be preparing some sort of attack, and a crosshair or some other target marker will appear on the screen and follow the player around, showing where the attack will land. Sometimes this can make sense when used with "Jaws" First-Person Perspective, but usually there's no reason for the target marker to be there apart from making the attack easier to avoid. May also manifest as a Laser Sight. It's one of the Acceptable Breaks from Reality provided by video games, because an attack that's impossible to know where/when it's coming would be Fake Difficulty for the player, especially if Hitscan is involved.
Advertisement:

A variation of this would be a shadow on the ground, indicating an object that is going to fall on that spot. This is sometimes the case with enemies that throw rocks or other heavy objects, or ones that jump up and try to land on you from above.

This term may also apply to NPC enemies that seem aware they have been targeted, when they would realistically have no way of knowing they were being aimed at. Enemies may be target aware if they move or change direction suddenly as the player's crosshair crosses or pauses on them when they were not "watching" the player at the time.

The non-Video Game version is the Bond Gun Barrel.

Visible crosshairs show up where the Colored Pencils' missiles are about to hit.

Visible crosshairs show up where the Colored Pencils' missiles are about to hit.