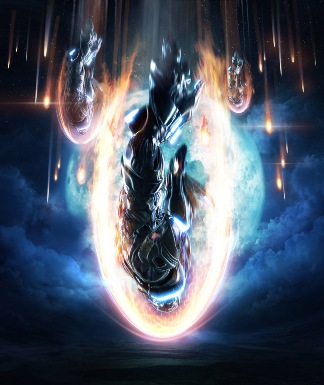 Who needs parachutes?
"The Arm started this war. But Section 8 is going to finish it."
— Alex Corde
"Evolution. What a joke. Yeah, sure, the technology gets better. The weapons get more powerful. As soldiers, we get smarter; better trained, and more efficient at what we do. But what we do is still the same. We fight. There's nothing 'evolved' about fighting, no matter what flag we wave. It's been the same since the beginning of time. We fight to protect what's ours, and take that's theirs. So, yeah; we keep fighting. We fight over differences. Out of fear. Out of prejudice."
Advertisement:

On the war-torn planets of tomorrow, Mankind's greatest battle is about to begin.

Section 8 is a tactical first-person shooter released in 2009 by developers Timegate and Southpeak Games. Set an indeterminate amount of time in The Future, 8th Armored Infantry, a division of 1st Recon of the United States Imperial Forces (USIF) is sent to a reclaim a section of space known as New Madrid from the Arm of Orion.

The game has been compared to the Tribes series, with its character customization options, and also to Wolfenstein: Enemy Territory / Enemy Territory: Quake Wars.

The game has little to no backstory and a criminally short single-player campaign, focusing on a multiplayer experience. You play Captain Alex Corde, member of 1st Recon, sent to see what the hell is going on in New Madrid. You find it taken over by rebels, and soon enough you are spearheading the offensive to reclaim your territory from The Arm of Orion.

Has nothing to do with government programs instituted to provide housing to underprivileged citizens, although those people probably got mowed down in the war ages ago.

The sequel, Section 8: Prejudice, was released 2011 as an Xbox Live Arcade title and for PC on GFWL and Steam. 1st Recon has learned that the Arm has information on the USIF it should not have had access to. When a mysterious enemy attacks their forward base "Atlas" and carries out a jailbreak of Arm prisoners, including a high-ranking Arm officer, Corde finds himself digging into the dark past and dirty secrets of his nation.