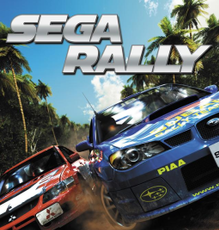 Sega Rally is a successful 3D Driving Game series created by Sega's AM5 department and initially released in arcades in 1994. Based loosely on the World Rally Championship, it includes driving on different terrains (like tarmac, gravel and snow), the choice of different cars (which the earlier released Daytona USA didn't have) and support for head-to-head racing.

While the series has been largely abandoned, its legacy lives on in Initial D Arcade Stage, which is adapted from the Seinen comics of the same name and uses the similar formula as SEGA Rally.

These games features examples of these tropes: