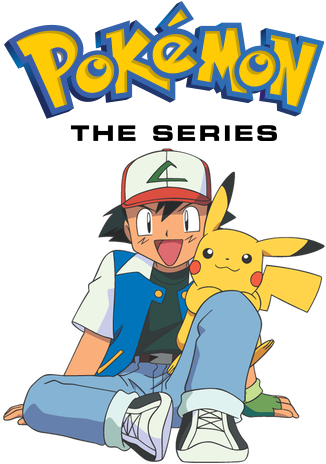 The story of Ash Ketchum and his partner Pikachu...
"I wanna be the very best, like no one ever was!
To catch them is my real test, to train them is my cause!"
—"Pokemon Theme", originally performed by Jason Paige

The Pokémon anime series, currently marketed in English as Pokémon: The Series, is a somewhat loose adaptation based on the Pokémon games by Game Freak. Given the success of the games, this series managed to make it to America as part of the marketing push, and, combined with the concurrent American airings of Sailor Moon and Dragon Ball Z, helped keep the new wave of Western anime adaptations (which started after Power Rangers) going.

It features the tale of Ash Ketchum and his pals (who change every saga), as well as the perennially ubiquitous Team Rocket trio of Jessie, James, and Meowth, who attempt to steal Pikachu or another rare Pokémon/item nearly every episode and are, with even greater frequency, sent flying sky-high with the Catchphrase "Looks like Team Rocket's blasting off again! *Ding!*"

The seasons are as follows:

For more information on the many, many characters, see the character sheet. Save all character tropes there, not here.

A list of the various movies can be found here. A Light Novel adaptation of the series was written by its original head writer Takeshi Shudō. For more information, see here.

This show is the Trope Namer for:

Togetic, leave the rest to me.

Misty looks fierce as she steps up to protect Togetic.

Togetic, leave the rest to me.

Misty looks fierce as she steps up to protect Togetic.