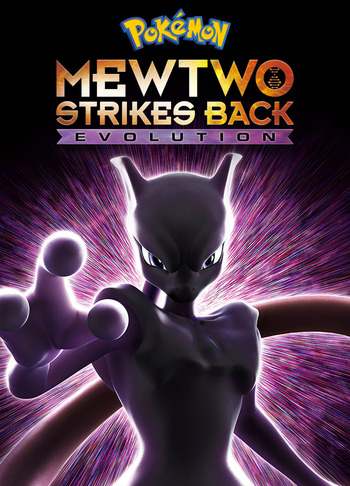 It's been 20 years since The First Movie, and now, Mewtwo's original movie has evolved to the next stage.
"Who am I? Where am I? Who wanted me to be created? Who asked for me to be created? I despised everything connected to my creation! And so, this is neither attack, nor declaration of war. You are the ones who created me. And I will strike back... against you!"
— Mewtwo
Advertisement:

Pokémon: Mewtwo Strikes Back—Evolution is the 2019 computer animated remake of the 1998 Pokémon: The Series film Mewtwo Strikes Back, directed by Kunihiko Yuyama and Motonori Sakakibara and produced by OLM and Sprite Animation Studios. It is the twenty-second film in the Pokémon series. The film was released in Japan on July 12, 2019, and worldwide on February 27, 2020 through Netflix.

Mewtwo Strikes Back—Evolution is the story of Mewtwo, a clone created from the legendary Pokémon, Mew. Ash, Misty and Brock must stop Mewtwo's plans to destroy humanity and the Pokémon they co-inhabit the world with and replace them with his superior clones.

Followed by Pokémon: Secrets of the Jungle.

Spoilers for the original movie are unmarked.