Anime / Pokémon: Lucario and the Mystery of Mew 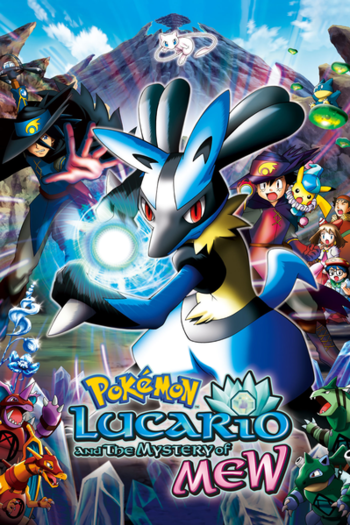 Our fellow Mew returns, but meets a guardian of the aura within.
Advertisement:

Pokémon: Lucario and the Mystery of Mew, known in Japan as Mew and the Wave-Guiding Hero: Lucario, is the eighth Pokémon: The Series film, and the last to be dubbed by 4Kids Entertainment before they lost the rights to the series.

In ancient times of Rota Town in the Kanto region, two armies warred against each other, threatening the safety of all the people who lived there as well. Because of this, a Knight named Sir Aaron, who could use a mysterious power called Aura, and his apprentice, a Pokémon named Lucario, were sent by the queen of Rota to quell the fighting. On their way, Sir Aaron told Lucario that he's leaving the kingdom and never coming back, before sealing Lucario away in his magic staff. Sir Aaron stopped the war and was proclaimed a hero, but no one ever knew what happened to him. Flash forward to the present where Ash Ketchum and friends are visiting Cameran Palace in the middle of Rota Town for a Pokémon tournament. Being The Hero and all, Ash naturally wins, and so is presented with the Staff of Sir Aaron. Because Ash wore a costume identical to Sir Aaron's clothes and Lucario sensed an Aura coming from him, Lucario escaped from the staff, only to wind up distraught by his new surroundings and distrusting of humans. Later that night during a party, a Mew enters the Palace, seeming to want to play, but is then attacked by a mysterious thief. While fleeing, Mew accidentally takes Pikachu (and Meowth) away to a nearby landmark called the Tree of Beginnings. So it's up to Ash and friends, along with Lucario's help, to rescue Pikachu.

The film is generally considered among the best of the series, as it makes a breakaway from the mostly derivative plot of the many Pokémon movies by featuring much more engaging characters and story. As of January 2022, it has the highest IMDb rating of the film series, 6.9/10 from over 4500 votes