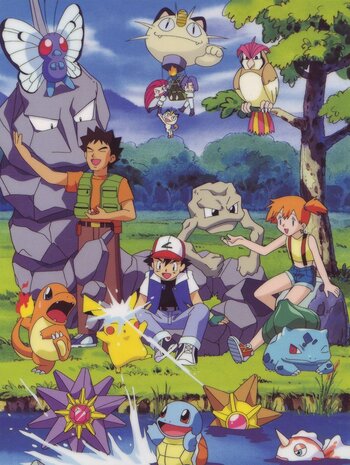 The first Pokémon anime series that ran from 1997 to 2002 in Japan and from 1998 to 2003 in America. This series would have Ash go through Kanto to take part in the Indigo Plateau Conference and Johto to take part in the Silver Conference. Brock, the Pewter City Gym Leader and Misty, the Cerulean City Gym Leader are his companions. Between those two regions, he would travel through the Orange Islands which are absent from the games to deliver the GS Ball from Professor Ivy to Professor Oak, also replacing Brock with Tracey, a Pokémon watcher.

The Kanto and Orange seasons are also branded as Pokémon The Series: The Beginning, and the Johto seasons are collectively known as Pokémon the Series: Gold and Silver. These brands are used on the digital streaming websites.