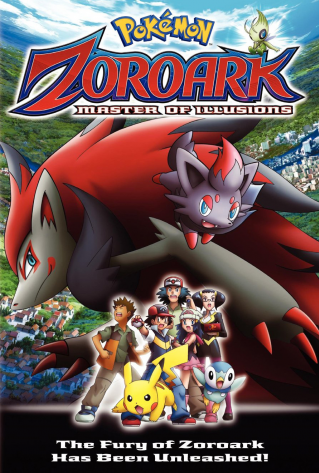 Pokémon: Zoroark: Master of Illusions (known in Japan as Pocket Monsters Diamond and Pearl the Movie: Phantom Ruler Zoroark) was the 4th and final movie for Pokémon the Series: Diamond and Pearl, and the only standalone movie, as the last three movies formed an interconnecting story with Dialga and Palkia.

A new sports game called "Pokémon Baccer" is having its world cup tournament held in a place called Crown City. Excited, Ash and his friends decide to travel to Crown City to watch. Everyone is very excited to see the game, especially because the three Legendary Beasts of Johto are going to be playing, led by businessman Grings Kodai. However, everything falls apart with that idea, since the evil Pokémon Zoroark stowed away on Grings Kodai's ship, controlling the beasts and making them wreak havoc across the city, causing everyone to evacuate.

At least until Ash finds out that Zoroark is Zorua's mother, and that she's only doing these things for Zorua's sake. Ash takes it upon himself to return Zorua to Zoroark, and to find out just what it is that Grings Kodai is up to. Which is further complicated by the appearance of the real Legendary Beasts that have come to stop Zoroark.