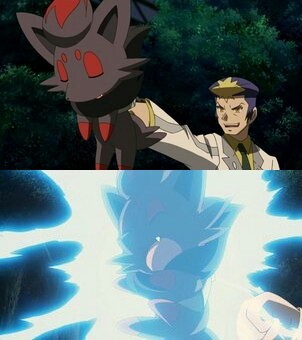 "Stop right there, Zoroark! One step closer and this little one is no more!"
Grings Kodai: I've thoroughly enjoyed playing our little game of tag. However, I already knew it would end this way.
Ash Ketchum: Stop, Kodai! All the trees and flowers will die!
Kodai: What do I care?! As long as my visionary powers grow, it's all worth it!
Ash: So you don't care what happens to Crown City?!
Kodai: It's true that twenty years ago when I touched the Time Ripple, Crown City withered, but no one knows a thing about that, just as no one will know what I've done today. All anyone knows is that I'm doing my level-best to capture the "evil" Pokémon Zoroark. (cackles evilly) VICTORY IS MINE!! (cackles even louder)
—Zoroark: Master of Illusions
Advertisement:

Pokémon has existed since the Game Boy era with many hundreds of Pokémon and counting being made for the goal to "Gotta Catch Them All". While most Pokémon are non-malicious, many of the worst villains prove that Humans Are the Real Monsters.

Character names are from the English dub.

Entries in each group are by original release date.