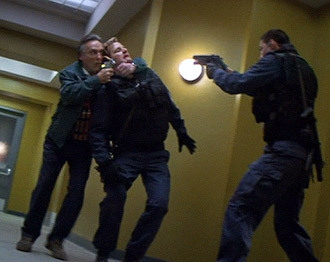 Unfortunately for him, Jack doesn't play by that rule.
Dobson: [holds a gun to River's head and uses her as a shield] I'm not playing anymore. If anyone so much as moves-
Mal: [walks in and shoots Dobson in the eye]
— Firefly
Advertisement:

A shield is a protective device, meant to intercept attacks. Attacks are usually accomplished with things such as bullets and swords, both of which are designed to penetrate flesh. So using a shield made out of flesh would seem like a fairly silly idea. However, make sure that the flesh belongs to someone important to your attacker, and all of a sudden, they become strangely reluctant to attack you.

If your attacker is heroic enough, then any old Innocent Bystander will do; their contract states that no matter how evil you might be, they can't even hurt the poor victim in order to get to you. For less idealistic opponents, you might need to go one better and capture their Sidekick, partner, friends or family. If you want to make really sure, make it their Love Interest.

If you've chosen wisely, then The Hero will now be unable to attack you without risking harm to your hostage. Hold a knife to their throat, and they can't even risk looking like they're going to attack. You now have the power to demand the hero disarms themselves, hands over anything you demand or even to die to save the hostage. And all you had to do was use some good old Cower Power. Hey, whatever works.

Don't let the power go to your head though. The Anti-Hero might just be tempted to shoot you anyway, even if it means a little collateral damage. And if The Hero is skilled enough or a good enough shot, they might just be able to take you out without harming your hostage. Also, actually following through with your "stop or I'll shoot" threat is seldom a good strategy, as this might lead to unfortunate repercussions; not only have you enraged the hero even more, but now you've literally wasted the one thing keeping him at bay (though for some reason the hero will almost never call your bluff on this one). And last, but not least, keep in mind that your "shield" is actually a living and usually hostile being, eager to bite you in the back of the hand or kick you in the groin the moment you lower your guard. Indeed, a knowledgeable hostage can feign fainting, and force you to not only control your weapon but a heavy chunk of deadweight; this is very effective but very rare, both in fiction and, alas, in Real Life.

Villains aren't the only ones who make use of Human Shields — Antiheroes are prone to using Mooks this way, especially as cover during the heat of a shootout, and the most vicious of them will use their enemy's loved ones to stay their hand long enough to get a shot in. A hero who tries this is apt to use it to try to defuse a villain's use of this by taking one of the villain's associates hostage, but as villains are a callous and vicious lot, expect the villain to put a bullet through the skull of the hero's hostage, just to illustrate just how evil he or she is.

A Sister Trope is Bulletproof Human Shield, where your attacker(s) callously open fire anyway — only to have their shots blocked by the victim you're holding. The distinction is psychological protection ("You wouldn't dare hurt this innocent victim!") versus physical protection. See also Safety in Muggles, where the mere presence of non-Masquerade persons stops a confrontation cold.

You don't have to be directly hiding behind someone for them to be a human shield. For example, filling your Supervillain Lair with kidnapped orphans is a good way of stopping the good guys from bombing it, so long as you remember to tell them about it. And if you want to pull a Wounded Gazelle Gambit against The Hero to turn the forces of good against him, you might use your own civilians as shields for something the hero cannot afford to let stand.

If someone suddenly volunteers to be a human shield by flinging themselves between what's shooting and what's being shot at, it's Go Through Me. If the human shield is ordered to stand there by a commander, that's Ordered to Die. This trope is the less deliberate cousin to Hostage Situation.

Contrast Draw Aggro (characters using themselves to get others out of danger).

Examples of any other human shields:

While Jumba is trying to find Stitch, who had landed on Earth and assumed the identity of a dog, Stitch barks to let Lilo hug him, making Pleakley jump in and direct the shot away, protecting him from being shot by Jumba.

Example of:
Protected by a Child

While Jumba is trying to find Stitch, who had landed on Earth and assumed the identity of a dog, Stitch barks to let Lilo hug him, making Pleakley jump in and direct the shot away, protecting him from being shot by Jumba.