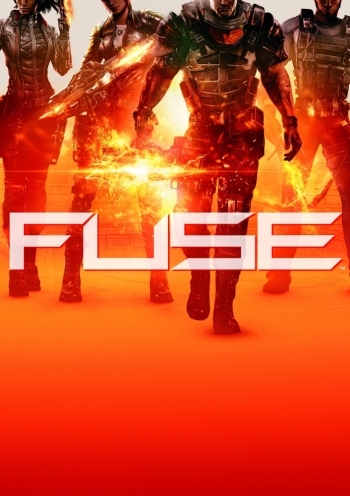 Fuse is a Co-Op Third-Person Shooter developed by Insomniac Games, published by Electronic Arts, and released on May 28, 2013 for the Xbox 360 and PlayStation 3. It has the distinction of being Insomniac's first multi-platform game. Set 20 Minutes into the Future, Fuse follows the exploits of Overstrike 9, a four-man team of operatives whose routine assignment quickly turns into a weapons theft by a mercenary group called Raven, forcing them into a race around the globe to contain a weapon that could, in the wrong hands, wipe out all of civilization.

Much of the game's story and mechanics revolve around an alien substance known as Fuse, which is able to bond (or "fuse", if you will) with any element, drastically changing its properties. In gameplay, this takes the form of Xenotech Weaponry, a special primary weapon unique to each member of Overstrike 9 that they acquire early on. As per Insomniac's usual modus operanti, each weapon is varying levels of both crazy and awesome. Beyond Xenotech, the rest of the game's arsenal is limited to basic, generic weaponry.

Gameplay follows the usual third person cover-based shooter routine, but with the addition of character leveling and perk progression for each agent as well as the ability to "LEAP" between agents in the middle of combat at will as long as they aren't controlled by another player. Though intended as a co-op game, all four team members of Overstrike 9 are always present, and those not controlled by players are instead taken over by the game's AI. The quality of your AI squadmates is debatable.

Alongside the game's main campaign is also "Echelon", a horde mode where the player characters Hold the Line against increasingly difficult waves of enemies. Like the main campaign, Echelon is be played solo or with drop-in-drop-out multiplayer. Agent progression is, mercifully, symmetric across both modes.