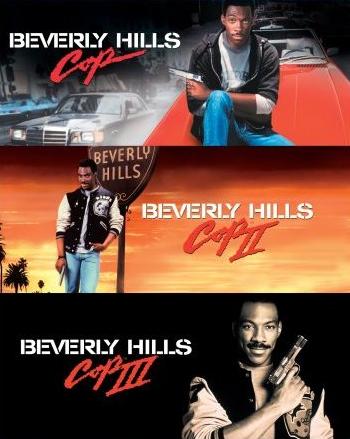 Beverly Hills Cop is a 1984 American buddy action comedy film directed by Martin Brest and starring Eddie Murphy as Axel Foley, a hip, street-smart detective in mid-1980s Detroit; as something of a loose cannon, he's not well respected by Da Chief, but the other guys on the force love him. One day, an old friend of his visits — then ends up killed by hitmen just outside Axel's apartment. Determined to find out what happened despite being warned away from the case, Axel takes vacation time and follows the killers' trail back to Beverly Hills, California.

Hilarity Ensues as Axel adjusts to the more straight-laced world of Beverly Hills, using his comedic timing and unflappability to get himself out of some sticky situations. As he tries to build a case against the Mooks that killed his friend back in Detroit, he manages to talk his way into (and out of) the Beverly Hills jail, his hotel, a bonded warehouse, a country club, and more. Just when he's about to crack the case, the Big Bad Victor Maitlan (Steven Berkoff) arrives and kidnaps his not-quite-love-interest, Jenny Summers (Lisa Eilbacher), forcing the Beverly Hills police detectives he's been trying to win over to come and help. The movie ends in a massive, scenery-chewing shootout at the villain's huge mansion, with the local detectives learning that sometimes bending the rules isn't so bad after all.