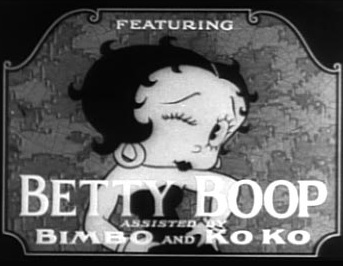 Assisted. Yeah...
"Made of pen and ink,
She can win you with a wink
"Yoo hoo!"
Ain't she cute?
"Boop boop be doop! (hic)"
Sweet Betty!"
— A shortened version of Betty's theme song.
Advertisement:

Pioneering cartoon series (from 1930-1939, plus a few one-off revivals) from Fleischer Studios, Betty Boop was the mirror of the stereotypical flapper, simultaneously looking for a good time and good-at-heart. In early cartoons, Betty's pals were Koko The Clown and Bimbo the dog; later on, Betty's grandpa Grampy, wild cousin Buzzy, and nonhumanized puppy Pudgy headlined episodes of their own.

The Hays Code essentially killed off all interest in Betty Boop — obviously, as a cartoon she couldn't wear such flamboyant outfits or maintain such a flirtatious attitude. The producers tried to make her more wholesome with more concealing clothes but this approach failed, it having been her flamboyant but sweet attitude that was so much fun to watch for her original viewers in the first place.

Despite not having a starring role since 1939, Betty remains a household name in the modern era due to the truly massive assortment of merchandise bearing her likeness, as well as her status as a sex symbol and a feminist icon.

As of 2013, Olive Films is releasing fully restored shorts of the series on Blu-Ray, culminating with four volumes.

, and was to be produced by Animal Logic. However, this film (like most of the previous attempts at a film) has been cancelled.

Back in 2016, there were plans for a new animated series starring Betty Boop

by Normaal Animation, however, very little has been announced since and according to concept artists who worked on the show, it has been reportedly cancelled.

A 4-issue comic book series was published by Dynamite in 2016.