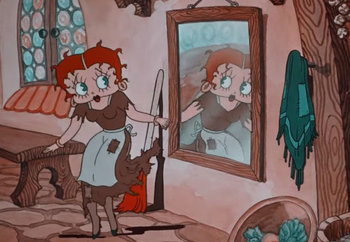 Poor Cinderella is a 1934 animated short produced by Fleischer Studios. It is the inaugural entry in the Color Classics series and is the only color appearance of Betty Boop, who plays the titular character.

It is noted that this is the first Fleischer cartoon produced in color, in this case Cinecolor, as Walt Disney had the exclusive rights to the Technicolor process for use in his Silly Symphonies. It is also the first use of the Fleischers' patented "stereoptical" process that allows animated characters to exist over live models, giving the settings a sense of depth and realism.

This short is currently in the Public Domain.