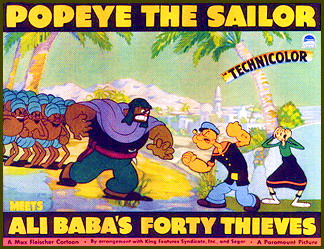 You better lock up your doors today,
cause Abu Hassan is on his way
Go in hiding, when I go riding,
There's me and my 40 thieves!
— Abu Hassan's opening Villain Song.
Advertisement:

The short begins with the villain of the picture, Abu Hassan (yet another blatant Expy of Bluto) and his gang of thieves riding through the desert (represented with an impressively made 3-D model set, not unlike those employed in Sindbad) as Abu sings the opening Villain Song.

The film then cuts away to Popeye, Olive Oyl and Wimpy, who are just minding their business at a US Coastguard post, waiting for work, when they receive an emergency signal that Abu Hassan and his thieves are attacking a desert town. They quickly make it there in Popeye's flying boat, only for it to malfunction and crash land in the middle of the desert. After a night and morning of long walking, mirages and dreadful heat, they finally reach a desert town, where they settle down and have a meal. Cue Abu Hassan and his thieves showing up to ransack the town, prompting the wrath of Popeye as they kidnap Olive Oyl and Wimpy. Popeye chases them down into the Cave of Wonders, where the real fighting begins!

This short has fallen into the Public Domain, and can be watched on YouTube here

Due to the success of this second two-reeler, a third and final Popeye Color Special, Aladdin and His Wonderful Lamp, would be made soon after.