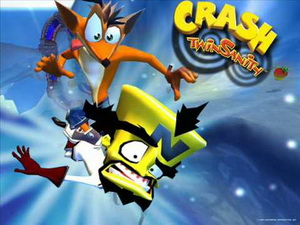 "I suppose in his head, if there's no hog to hump or bear to bonk, you just gotta ride the nearest scientist."
Cortex takes a dive and Crash jumps onto his back,
transforming him into a makeshift sled.
Did Cortex trip, or was he pushed?
— Description for the HumiliSkate, Crash Twinsanity
Advertisement:

Skateboards, Sleds, Surfboards, and other types of sliding modes of transport are designed with a streamlined, vaguely fish-like shape and smooth surface to allow movement on the surfaces they are made for. The human body is not fit for such purpose.

Try telling that to people of fiction, however.

In this trope people use other people (or themselves) as makeshift surfboards. Depending on the tone of the work, they may be completely unharmed by this, or they're in for a Death of a Thousand Cuts if the surface they're surfed on is rough.

The very act itself can Played for Laughs that it often crops up as a form of humiliation because it's literally wiping the floor with someone, except this time you're actually riding them instead of using them as a rug. Other times, it's an offensive move due to the aforementioned Death of a Thousand Cuts.

This is not limited to human bodies (dead or alive). Animals (especially Penguins and Fishes that look suspiciously like surfboards) work too. Robots (like say, a Ridiculously Human Robot or Tin-Can Robot) only count if they're shaped as anything but an actual surfboard shape. Basically any "living" thing.

The key to the trope is the person/animal/robot is used as a vehicle that slides. So a person being used as a surfboard on water counts. However, if they are used as a diving and "surfing" mount (as in straddled, not balanced on with feet) on water, then that would be Horse of a Different Color instead, due to being used as a living jetski and not a surfboard.

Self-sledding only counts if used outside slides. Because "using yourself as a sled in a slide" is stretching the trope a bit too much.

Sister Trope to Wipe the Floor with You via the "floor wiping" side effect of the execution of this one. Sister Trope to Shield Surf via act of surfing a non-surfboard itself. A Sub-Trope of Implausible Boarding Skills, which covers any other "Improvised Skateboard". May be a form of Sprint Shoes if it essentially functions as a dash, and can qualify as a Slide Attack if used offensively.

Despite the name, examples of using living being as Hover Board (and thus evading the friction issue) count here as well.

Has nothing to do with Body Surf.

Asura uses an enemy mook to descend the ship's interior.

Asura uses an enemy mook to descend the ship's interior.