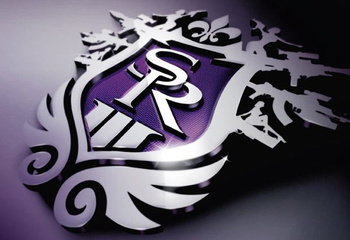 Strap It On
I'm livin' in the 21st century, doin' something mean to it
Doin' better than anybody you ever seen do it
Screams from the haters, got a nice ring to it
I guess every superhero need his theme music
— Kanye West, "Power"

Saints Row: The Third is a Wide Open Sandbox video game released in late 2011 for the PlayStation 3, Xbox 360, and PC, and again in 2019 for the Nintendo Switch.

It has been a few years since Saints Row 2, and the Third Street Saints street gang have ridden their success to become mainstream celebrities who pose for photos during their crimes and flog their own brand-name merchandise.

Everything is looking pretty sweet until a bank heist goes wrong and the Saints find themselves in the sights of the Syndicate, a legendary criminal fraternity who control the seedy metropolis of Steelport with an iron grip. Dumped into Steelport with no money, no respect and a heavy loss on their shoulders, the Saints vow to take revenge by seizing the city for themselves from the three Syndicate gangs that control it:

The game differs from its predecessors in a number of areas, primarily through respect unlocking upgrades rather than missions, as well as activities also unlocking portions of gang territories similarly to stores. Character customization has also received a make-over, which now favors quality over quantitynote so much so the demo was a character creator.

through options (ranging from realistic to absurd, such as scars or making your character blue) and appearance (such as loose clothing and hair actually bouncing and moving now) like they were in the previous game.

It's also thematically a fair bit different than even 2; while 2 was a decent bit sillier than the original Saint's Row, Third kicks the absurdity into overdrive in a bid to give the series a different identity than its greatest point of comparison, Grand Theft Auto.

The character sheet is found under the series' name for continuity reasons.

The game received positive reviews from critics, while gamers were more mixed. Some noted that the game either became too easy after a certain point or that the second game is better for various reasons. It also received multiple Downloadable Content packs on and after its release. In late 2012, a year after the game came out, all of this content was bundled together in The Full Package version of the game, minus two unpopular Disc-One Nuke DLC items. The base game (no DLC included) was given away for free to PlayStation Plus subscribers during July 3 - September 25 2013, and to Xbox Live Gold members during May 16 - 31, 2014.

Oh, and [adult swim] were one of the sponsors of the game, and have a station within it (hosted by Jon of Delocated) where you can listen to a few songs from the network's lineup.

A remaster featuring redone models, sounds, and lighting was announced 6th April 2020, and was released on May 22nd on PS4, Xbox One, and PC via the Epic Games Store.

Every time that Pierce and Oleg play chess, the pieces are knocked off the board.

Every time that Pierce and Oleg play chess, the pieces are knocked off the board.