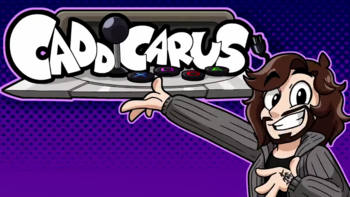 Caddicaruuuuuuus!
"Greetings and salutations, my beautiful people, and welcome to the Caddicarus show, where I always have to do the dirty deed of deciding whether or not a game deserves to be slaughtered or salvaged."
— His former opening quote
Advertisement:

Jim Caddick, better known by the pen name "Caddicarus", is a British YouTube personality who hosts a Video Review Show, which specializes in video games from the PlayStation era of gaming. His show can be found on YouTube, and he was also a charter member of the (now-defunct) Hidden Block collective of reviewers.note He was the last of the six members to stop featuring the Hidden Block intro bumpers in his videos. The channel offers six different shows. Caddicarus (the main reviews), Top 10 Lists (self explanatory), Current Quickies (rapid-fire modern game reviews), Caddy's Retrospectives (Caddy's opinions on the first three games of a franchise), Tinker Time (whatever Caddy feels like reviewing at the time), and Drive Thru Review (quick, casual reviews under three minutes with very little editing). In 2013, he opened a second channel called Caddy's Conundrums (now Caddy Plays) where he uploads videos that wouldn't fit on his main channel. Drive Thru Review started on Caddy's Conundrums and has since been moved to the main channel, while Puppicarus started on the main channel and has since been moved to Caddy's Conundrums.

On February 10th 2016, Caddy announced that he would be heavily retooling his channel, removing most of the other side shows he does, with every Saturday (originally Sunday) being a standard Caddicarus episode or Top Ten and every Wednesday being a random video under the name "Caddy". This is being done out of Caddy's own belief that he had begun to suffer Attention Deficit Creator Disorder and lost focus on his channel. The Spyro the Dragon retrospective is still on the cards as a 1 million subscriber special, but will be done as one huge video instead of the usual 3 videos across 3 weeks as per usual.

In 2017, Caddicarus announced he would replace Current Quickies with a new show called Caddy. Similarly, in May 2017, his Film Fridays series (in hiatus for three months) became Cinemaggots.

His channel was revamped once again in 2020, as Caddy changed his focus from in-depth reviews of single games to longer videos covering several different games of a similar category. Due to the longer production time, he has changed his schedule to one episode per month rather than three. He also suffered from a major Schedule Slip for the first few months of 2021 due to technical difficulties with his new computer, though he has begun uploading regularly again in April. Similarly, he was unable to post any videos for the first few months of 2022 due to coming down with a major case of hives.

, and his second channel here

Caddicarus is Caddy's main (and self-titled) show, where he reviews a game (usually a retro game, specifically for the PS1) every episode in his own comic style. This was modified in 2020 where episodes now typically cover multiple games of a certain theme, with episode lengths now around 30-80 minutes rather than 10-30 minutes beforehand. His first and longest running show to date, Caddicarus is full of Running Gags, Caption Humor, and oh so many Funny Moments. Episodes were originally uploaded on Sundays, but have moved to Saturdays as of Season 11.

Videos released in 2020note Since the 2020 retool, the categorization into seasons has been discontinued, meaning each section will now encompass the episodes released in its respective year.

Caddy's second show, his Top 10 Lists. They are... Well... Top 10 Lists. However, instead of just reusing the cliched format, Caddy decided to make his Top 10 Lists a bit more interesting by having some more unique topics, so instead of Top 10 Best Games or Top 10 Best Levels, we have Top 10 Merchants!, and Top 10 People in Games that Probably Stink Like Sh*t! In January 2017, the list videos were integrated into the main The Caddicarus Show lineup.
Caddy: Top 10 Lists, which, if you're stupid... They're Top 10 Lists.

Today's Special was originally planned to be a show that would review a new release in great detail, but ended up being cancelled after one episode. What's more, that one episode was criticised by him in a later video (Top 10 Games That I Like... But No-One Else Does!), with him calling it 'horribly outdated'.
Caddy: Bonjour, everybody and welcome to Today's Special! Yohohohohohohohoho!

Current Quickies is a series of rapid-fire fast-talking reviews. It has gone through many changes since it's first episode, and was originally called by Caddy himself an "Indie Game Spotlight", but now reviews Triple A titles as often (if not more often) than indie games. While the show keeps its insanely rapid pace during the review segments, it has lost the near constant bleeped out swearing that featured in the first episode. In addition, the "macho" voice used in the first episode is only used in the intros and outros of the videos now, with the actual review sections in Caddy's normal voice. This show was discontinued in January 2017 and replaced with a new show called "Caddy", but Caddy has said that he might bring back the host character (named Quick J. Hoarsethroat) for bit parts in future reviews.
Caddy: 'Ello, my duckies! CYOAR!

Caddy's Film Fridays is Caddy's newest show made by Cerys and presented by Caddy introduced after the Feb 10th 2016 retool which focuses on movies, new and old, with episodes released every Friday. Some episodes feature only Caddy talking about his opinions on a particular film, while some feature Cerys' daughters answering questions about particular films. In May 2017, it was renamed to "Cinemaggots" after its three-month hiatus, then was discontinued in December that year.

Caddy's Retrospectives is a series where Caddy reviews the first three instalments in any video game franchise he feels he wants to cover. Each entry contains three videos, one for each game he covers. Because these series involve non-stop videos back-to-back for three weeks, they tend to be more infrequent than Caddy's other shows. However, they are beloved by his fans, and have started many Running Gags of their own. This show was discontinued on Feb 10th, 2016 as part of the retooling of Caddy's channel, with the promised Spyro retrospective as one big video when he gets 1 million subscribers.
Caddy: CADDY'S RETROSPECTIVES!

Tinker Time was the show in which Caddy reviewed games in a fashion that wouldn't fit with his main show. They aren't so much comedy videos as they are more traditionally-styled reviews. They show Caddy sitting in front of the camera and giving his opinion with a screen showing gameplay footage. He then ranks them on a ranking system that goes from "Flammable" to "Unbelievable". The only exception is the infamous (amongst fans) review of The Stanley Parable, in which he gives the rating a minute into the video, and the rest of the video is a loop of half of the opening cutscene, again and again and again. He also called his review of Metal Gear Solid V: Ground Zeroes one of the most difficult reviews he has ever had to make though. This show was discontinued on Feb 10th, 2016 as part of the retooling of Caddy's channel.
Caddy: Hello everybody, and this week I've been having a little bit of a tinker around with... [Insert game name here]. So can I please get an intro... Now!
Intro: TINKER TIME!!

Drive Thru Reviews was a show consisting of quick, casual reviews lasting up to 3 minutes with little editing, and were usually uploaded every Wednesday. The games that are reviewed in this show are those that Caddy had been playing recently, old or new. This show used to be on his secondary channel, but was moved to his main one due to popularity. This show was discontinued on Feb 10th, 2016 as part of the retooling of Caddy's channel.

The Christmas Specials for 2016 and 2018, these are much shorter reviews uploaded daily, starting from December 1st and ending on Christmas Day, that count down to either Caddy's Top 25 Favorite or least Favourite games.

Do It With Puppicarus was a sketch show starring Puppicarus, a puppet version of Caddy, showing viewers how to perform day-to-day tasks with his own unique style. The show has been cancelled due to negative feedback.
Caddy Plays (Secondary Channel)

Random Conundrums is a collection of all the videos released on Caddy's second channel that don't really belong anywhere else. It is possible Caddy originally meant to make it a more promenent series, considering the first video he released on the channel was one. However, only two other videos have been added to the list since. The first video was a vlog-type video in which Caddy gave a tour of his room, but the two other videos were closer to short sketches.

Regarding... is the series that launched alongside Caddy's second channel. The videos basically revolve around Caddy ranting about whatever topic he feels like talking about. The topic doesn't have to relate to video games, but it often does.

[NOSTALGIACAD] was the second series of Caddy's second channel. The videos released in the series are the videos that Caddy uploaded to his main channel before his "Rascal Racers" review, which have since been deleted, and then re-uploaded here. The series ended with Caddy's final Pre-"Rascal Racers" video, How to Pull Birds, which includes the origin of the "CYOAR!" Running Gag. Within the series was what was probably his most loved Pre-"Rascal Racers" videos (judging by its appearance in the 10,000 Subscribers video), Randasong, a series of songs created by him revolving around a genre and a topic suggested by viewers.

If it's your birthday while reading this page, then happy fricking birthday to you. And please remember to stay beautiful!

Example of:
Bizarre Taste in Food