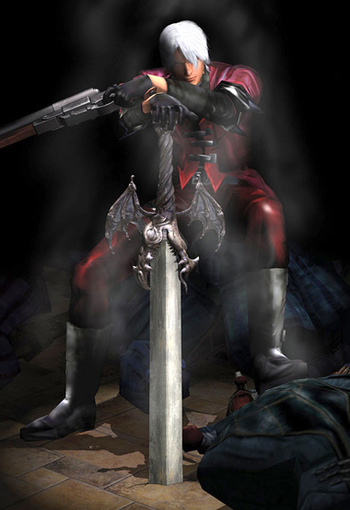 Taking place in the modern day, the games revolve around Dante, the Anti-Hero Human-Demon Hybrid Demon Slaying son of an Ascended Demon named Sparda. Thousands of years ago, Sparda sealed away his fellow demons and freed the human world from their control. However, Sparda eventually died, leaving behind a human wife named Eva and two halfbreed twins named Dante and Vergil. Without Sparda to protect them, Eva is soon murdered, Vergil becomes an Anti-Villain obsessed with power, and Dante decides to work as a demon-hunting sword-for-hire so he can find the demons responsible for tearing apart his family and give them their just desserts. And make a great deal of money, of course.

Gameplay focuses on using mixtures of Hack and Slash, Launcher Moves, Ground Pounds, Dash Attacks, Video Game Dashing, Double Jumps, Super Modes, and Stance Systems to create stylish, fast-paced Combos. Onus is placed on the player's skill with their moveset, and their ability to alternate between different weapons and moves. However, Adventure Game elements such as puzzle-solving and exploration are also featured.

The series also expanded into different media outside of video games, such as light novels, comic books, manga, an anime adaptation, a board game, and stage plays.

Note: Each game in the series now has its own page, as does the anime. If a trope or an example only applies to one or two games in the series, or only to the anime, put it on that page. Likewise, Character-specific tropes must be placed on their Character folders, especially tropes that only apply to one or two characters. To simplify the labels in this page's trope list, the mainline games are referred to by their numbers, while acronyms (e.g. TAS, DmC) are used if necessary.

We are falling
The night is calling
Tears inside me
Calm me down...

Example of:
The Dog Was the Mastermind