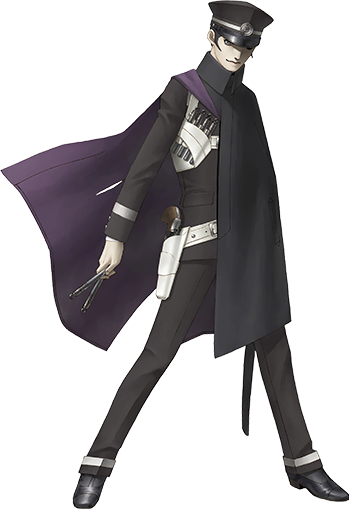 A young student of Yumizuki High School who was trained at the Kuzunoha village in the art of the Devil Summoner. Once he was ready, he undertook the trials at the nameless shrine in the heart of the Shinoda mountains and became the fourteenth Raidou Kuzunoha. He was assigned a partner by the Herald of Yatagarasu named Gouto, a sarcastic talking cat who was to guide Raidou in the ways of a Devil Summoner and was sent to work part-time at the Narumi Detective Agency as a cover for his true task.

As the newest Raidou Kuzunoha, it is his duty to protect the Capital from the demons of the Dark Realm, and ensure that the supernatural world is kept in check. His abilities with a katana are without equal, and his skill with a pistol unmatched, but Raidou's true power comes from the demons tucked away in confinement tubes beneath his cape.

Raidou Kuzunoha the XIV returns as the protagonist of the sequel, Raidou Kuzunoha vs. King Abaddon. He returns to the shrine in Shinoda and undergoes retraining in preparation for returning to work for under the Herald of Yatagarasu. Gouto-Douji returns in order to provide guidance in the same capacity as he did in the first game. Gouto unseals some of Raidou's abilities to allow him to summon two demons at once, and Raidou returns to work as The Capital's guardian, seeking out the new disturbances that were detected by the Herald of Yatagarasu. Raidou once again winds up working with Shouhei Narumi and Tae Asakura.

Raidou Kuzunoha replaces Dante's role as a recruitable ally in the updated re-release of Shin Megami Tensei III: Nocturne Maniacs, titled Shin Megami Tensei III: Nocturne Chronicle Edition, which was released along with Devil Summoner: Raidou Kuzunoha vs. King Abaddon. Despite not being the protagonist of the game, Raidou remains silent, with Gouto speaking in his stead. Many of his in-game attacks parallel Dante's from the original but have new names. He does one up Dante though by gaining the move 'Pierce', which was previously exclusively reserved for one other demon and the Demi-Fiend, the latter who can only get it on the True Demon Ending path. So Raidou is even more badass than Dante. 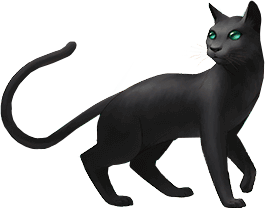 Gouto is a mysterious talking cat who has been the partner of every Raidou Kuzunoha since the second. Not much is known about Gouto, other than the fact he's not of this world and his real form is not that of a cat, although he does have a shameful secret obsession with a certain cat toy.

Now assigned to the fourteenth Raidou Kuzunoha, Gouto's job is to offer his support and advice as he deals with the supernatural world of demons, and to ensure Raidou keeps to his duties as the newest Raidou Kuzunoha. Despite Gouto's sarcasm, he believes that this Raidou Kuzunoha may be the best he has ever had the honor to guide.

When the Soulless God Oumagatsu was awakened, Gouto helped to come up with the plan to destroy the Tai-itsu and to ensure its success joined a demon in a rocket bound for the satellite. When the Tai-itsu was destroyed, so too was the earthly body of Gouto. However, despite this drawback, Gouto continued to guide Raido as a formless voice until the end of his mission.

Just before the destruction of his body, Gouto revealed that his true form was that of the first Raidou Kuzunoha and that he has watched every summoner to bear his name since. By the end of the game, Gouto is seen as a raven as he follows Raidou on his next mission.

In the sequel, Gouto has returned to his cat form.

In an optional conversation in the sequel, Gouto reveals that he committed an unspecified crime during his role as Raidou Kuzunoha; as punishment, he is forced to mentor and watch over all his successors until they die. Gouto also mentions he was previously a Housoushi magician before becoming Raidou Kuzunoha.

Narumi was once an officer in the Japanese Imperial Army, but after being witness to the corruption of the military, he retired to become the owner of the Narumi Detective Agency. He is well versed in the ways of the world, and is aware of its many secrets, even having knowledge of demons and the supernatural. As such, he agreed with the Herald of Yatagarasu to take Raidou on as a part-time junior detective while he worked secretly as the new Raidou Kuzunoha.

The Narumi Detective Agency only takes on the most unusual cases, where the impossible is all that's left, although generally he isn't the type to get his hands dirty, and would rather pass on all the legwork to Raidou. While on the surface he may appear lazy, Narumi cares a lot about the people and won't stand idly by while the citizens suffer. Should Raidou ever be in deep trouble, Narumi will try to help, even if it's far beyond his abilities.

Shouhei returns as the head of the detective agency once again in Raidou Kuzunoha vs. King Abaddon. Now claiming to be a "Modern Man", Shouhei has taken to blending his own coffee and eating nothing but toast for lunch.

Tae is an ace reporter for the Capital Daily, going by the pen name "Kichou" that comes from her respect for the feminist crusader Raichou Hiratsuka. She works hard to improve women's lot around the Capital and does all her own legwork despite the danger that may be involved. She has an unfortunate tendency to faint when frightened (somewhat understandable given what she's prone to running into) but doesn't let this discourage her from going out and getting the scoop or trying to help in tough situations.

Tae is an old friend of Narumi's, and when she managed to snap a shot of the mysterious Red Cape that has been sighted in the Capital, hires Narumi and Raidou to help her in her inquiries. After the Red Cape caper, Tae turns to Raidou several more times when facing potentially hostile situations. 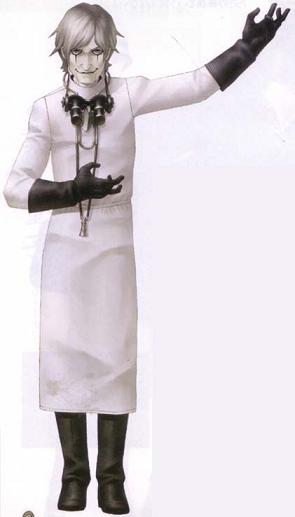 He is an alchemist and a demonologist, who makes his home in the basement of Konnou-Ya. As the resident of the "Gouma-den", he's highly interested in studying Devil Summoners and the demons they employ. To that end, he will fuse your demons to strengthen them, heal you and your demons for a fee, keep track of the demons you've seen, and increase the power of your katana. He may be more than a little eccentric, but he will be of a great help to Raidou's journey.

In Devil Summoner: Raidou Kuzunoha, Rasputin played the role of a major character. He was a Dark Summoner (a Devil Summoner who turned his back on the teachings for personal gain) who attacked Raidou Kuzunoha several times to prevent him getting too close to the truth about the Soulless Army Project. He is believed to be the real Rasputin (although he is reported to be dead by then) until it is revealed that he is, in fact, a mechanical man working for Munakata as collateral to keep the project a secret until it is fully underway. Later, after his contract with Munakata is up, he unexpectedly turns to Raidou with information on Munakata's location and goal. He then seemingly watches from the sideline with neutral feelings on the outcome. It is revealed he is also a time traveler from the future, apparently sent to maintain the timeline but ignored his mission to pursue his own goals. By the end of the game, it is implied Rasputin remains in Raidou's time to become more 'human'.

He returns in the sequel to provide hints for Raidou to defeat the Appollyon.

The daughter of Takeshi Daidouji, head of the prestigious Daidouji family, Kaya is known for her sunny disposition. She treats her classmates and servants as equals despite being raised as a member of the upper crust and is loved by them in return. However, Kaya has a dark family secret hanging over her head, and discovered that she was doomed to be possessed by a demon on her sixteenth birthday.

Kaya spent much of her time locked in a secret basement beneath the Daidouji Residence as she approached her sixteen birthday, but with the help of her uncle, Kiyoshi, she escaped only to meet with Munakata's forces. Desperate, she contacted the Narumi Detective Agency and requested to meet them in private. Narumi and Raidou went to meet with Kaya, only to witness her taken by mysteriously masked soldiers dressed in red.

Much later Raidou was able to rescue Kaya, who took up temporary work at the Narumi Detective Agency afraid to return home. But all was not well, and after using Raidou to help her acquire an ancient artifact needed for the Super Soldier Project, revealed that she was already possessed, and escaped into the Dark Realm.

Finally, after Raidou destroyed the Soulless God Oumagatsu, he is able to pursue Kaya into the Akarana Corridors of time where he discovers that the presence within Kaya is a Raidou Kuzunoha of the future. After a long battle, and even after the entity possesses the Soulless God Yasomagatsu, Raidou is able to defeat it. Expelling the entity from both the ship and Kaya, Raidou cast it into the abyss of time and returned Kaya safely to her family.

A young Devil Summoner who works for the Yatagarasu in Raidou Kuzunoha vs. The Lone Marebito. A descendant of Abe no Seimei, he was sent to aid Raidou after coming across people who had obtained unusual powers. Eventually reveals his true colors as the Big Bad of the manga.

The deity worshiped by the Tsukigata villagers in Raidou Kuzunoha vs. King Abaddon. He speaks to Raidou throughout the story. His personality is split into two halves: the benevolent Sorrow Aspect and the nihilistic Anger Aspect. Anger Aspect is also the Big Bad of the game and takes the title of King Abaddon.

Raidou Kuzunoha vs. The Soulless Army

The Big Bad of Raidou Kuzunoha vs. The Soulless Army. He was a member of the Temple Knights in the future of what is implied to be Shin Megami Tensei II. Not wanting to be a slave without any freedom in a world ruled by the corrupt Messians, he has traveled back in time to change the future and create a world that isn't under the control of the Messians.

Raidou Kuzunoha vs. The Lone Marebito