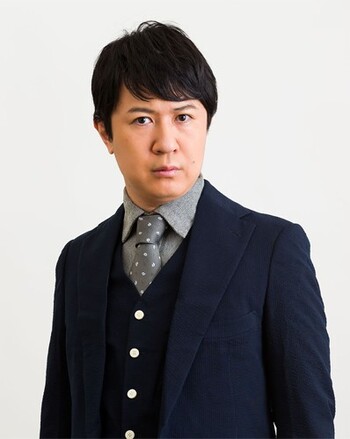 Here's what you'll say next: "Describe Tomokazu-GAUNTLET HADES!-Sugita here, and do it in an old-fashioned way." Am I right?

Describe Tomokazu-GAUNTLET HADES!-Sugita here, and do it in an old-fashioned way.

Tomokazu Sugita (born October 11, 1980 in Saitama Prefecture, Japan) is a seiyuu who went from virtually unnoticed to very popular thanks to the anime juggernaut that is Haruhi Suzumiya, where he voiced Kyon. Before that, some people might recognise him as Hideki from Chobits, but, well, that's old news. After his performance as Kyon, he started displaying a wide range of voices, making him one of the best and most revered seiyus in the business today. His forte is most likely the Deadpan Snarker type.

He also has some sort of rivalry with Tomokazu Seki, just because they have the same given name. They are in fact managed by the same agency Atomic Monkey

which Seki is a founding member of.

He's very "hardcore" according to the Blue Radio podcast. Plus it's known, from various radio shows and interviews, that he's also a VERY keen gamer and anime otaku, coming out with references to anime, manga and games even when nobody besides him knows what he's talking about. This is why he's nicknamed "Freedom Sugita" by fans. And no, he is not doing this because he's influenced by his role in Gintama. He just happened to be awesome like that. Occasionally, a fellow seiyu or two will catch the references and continue the conversation from there.

He's notable that for a few times, he made some spot on Norio Wakamoto impressions, once in Bururaji, again in Gintama and later when he, along with Yūichi Nakamura and Takahiro Sakurai, do so while playing a YuYu Hakusho fighting game for the Mega Drive (Yu Yu Hakusho: Makyō Tōitsusen, to be specific), all picking Wakamoto's character Chu. And narrating it. Later he does it again in Sket Dance.

Now available as a GPS.

He and Yūichi Nakamura also host a program called Tokyo Encounter where they play video games and share some trivia. And also goof off. That Wakamoto impersonation? It's from that show.

He was also responsible for revealing (well, to be exact getting the confirmation from Mitsuhiro Ichiki himself) about the entire mess of the staff of Kokoro Connect. Needless to say, he wasn't amused by it.

He, alongside Arc System Works, revealed at Tokyo Game Show 2012 that they were collaborating on a doujin game called Getsuei Academy Kou written by himself.

And it became an actual game itself

under the nameTsukie Academy Kou. He also proposed and created the design for newcomer Amane Nishiki in BlazBlue: Chronophantasma.

, in which he's a Virtual YouTuber using his Mascot from his personal radio show, Anigeradidooon. (Side note: said mascot is female. Yes, it's every bit as jarring as it sounds.) Fun fact, his Youtube channel has the same name as the agency he founded in 2020 after departing from Atomic Monkey.

Shit! We're just finishing the related tropes but the index is about to Fly Away! Fly Away to Permanent Red Link Club! At this rate, we'll also Butterfly Away! Before that happens... Let me show you...my trump card.
And what exactly is your trump card?
(long beat)
KIVATTE NIGERUNDAYO!
Yare, yare...