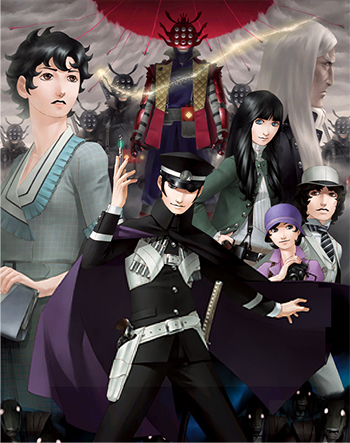 Raidou and pals have just shown the Soulless Army the door—now the citizens of the capital can rest easy again, right? Wrong. There's been a sudden run of bad luck all over the city, and a bunch of strange fellows in bug masks have been hanging around and causing trouble. On top of all that, yet another mysterious dame has shown up at the Narumi Detective Agency with a missing-persons case for our intrepid gumshoes to solve. And then there's this blond boy who's definitely not Louis Cypher... What exactly any of these things have to do with each other—well, that's for you to find out.

This game is a direct sequel to Raidou Kuzunoha vs. The Soulless Army, a rarity for the Shin Megami Tensei franchise. The changes to the gameplay range from minimal to enormous—most notably, the previous method of catching demons by hitting their weak point and mashing a button until they're trapped in a tube has been replaced by the "demon contract" system seen in many other Megaten games. The battle system has also seen a massive overhaul, replacing the static pre-rendered screens with larger areas suited to more dynamic combat and revamping Raidou's attacks. He also has the ability to summon two demons at once and the fusion system has been expanded with the addition of Passive Abilities and longer, more flexible ability lists, creating a larger advantage to using fusion instead of relying on capturing alone. Many other changes have been made across the board to address issues from the first game and this sequel has seen much praise for the improvements. Plotwise, the story is much darker and now includes a return of the traditional MegaTen alignment system.

It was released in Japan in October 2008 and shipped in extremely limited quantities for the US on May 12th of 2009. The Japanese version also offered a limited edition version of the game that included a new copy of Shin Megami Tensei III: Nocturne Maniax Chronicle Edition, which simply replaced Devil May Cry guest star Dante with Raidou. The US version is bundled with a Raiho plushie, which Japan got as a pre-order bonus.

Like Soulless Army, King Abaddon was released on June 24, 2014 on the Playstation Network as a PS2 Classic.

A manga sequel, Devil Summoner: Raidou Kuzunoha vs The Lone Marebito, was published in Japan by Enterbrain under its Famitsu Comic Clear magazine. 6 volumes were published.