Marriage to a God 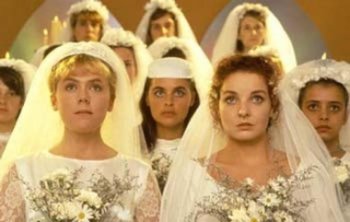 "I've always admired you people, nuns I mean. ... I mean, look, you're married to the big J.C. You're his old lady, it's an amazing thing."
— Dolores, Sister Act
Advertisement:

Not literal marriage to a Physical God, that is, but a symbolic marriage to a less-tangible deity, who may or may not be real. Sometimes it's fairly benign — the girl in question (and it usually is a girl) simply serves as a priestess of the deity to whom she is wedded. Other times, this involves Human Sacrifice, in which case the god is probably either evil (possibly a demon or an Eldritch Abomination) or nonexistent. This type can be the dark secret of the Town with a Dark Secret and may be accompanied by a Fête Worse than Death.

For the more literal type of marriage, see Divine Date.

Alternative Title(s): Married To A God