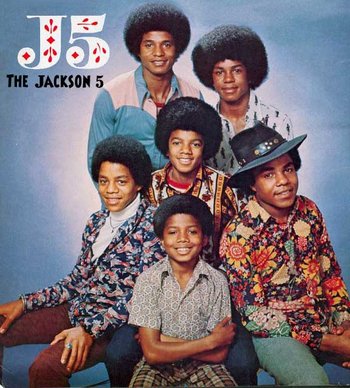 The Jackson Five (called The Jacksons beginning in the mid-1970s) were a Soul/Pop band from Gary, Indiana who were very popular from the late 1960s until the early 1980s.

After gaining a following in the northern Indiana/Chicagoland area, including a regional hit with "Big Boy" in 1968, they signed with Motown Records. Motown honcho Berry Gordy immediately put them to work with the writing/production team he called The Corporation (Freddie Perren, Fonce Mizell, Deke Richards and Gordy himself), establishing a style that mixed the gritty dance rhythms of Sly and the Family Stone with catchy and cheery pop. Their Motown debut "I Want You Back" quickly shot up the charts and hit #1 at the start of 1970. This launched a whole string of Top 10 hits ("ABC", "The Love You'll Save", "I'll Be There", "Dancing Machine", "Enjoy Yourself", "Shake Your Body Down To The Ground", "Blame It On The Boogie", "Torture" and "Can You Feel It?"), making them the most commercially successful black act of their era. They were also featured in a cartoon series (The Jackson 5ive), a variety show and numerous stage performances. After they moved to another label in the mid 1970s, they were forced to change their name to The Jacksons, because Motown had copyrighted their original band name. Still, everybody on Earth kept referring to them as The Jackson Five.

They even gained an Rival in the form of The Osmonds, an all-white family group who adopted a similar Soul-influenced style (their breakthrough hit "One Bad Apple" had been written for the Jacksons). One band member was clearly the star of the group: child singer Michael Jackson of whom we all know would break out to have an even more successful solo career, but that's a different story...

Tropes associated with The Jackson Five are: