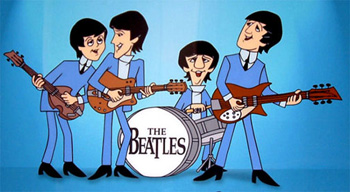 I wanna hold your hand! But they won't draw me doing it.
Advertisement:

When a music act (band or solo) gets big enough, sooner or later, someone will probably attempt to make a TV show featuring said musician(s). This show is often animated, and the band members may be Not Quite Starring.

The standard format for such shows usually goes like this: the band is Touring the World, often riding in a Cool Car or tour bus (or even better, a Cool Tour Bus!). They have an adventure in every city. They solve the issue in time to sing a song at the end of the show.

Alternately, it may be a flashback series, showing the band in their hometown as upcoming performers looking to make their big break. And getting in and out of adventures and singing a song at the end. Other series may go even further, casting the band as Superheroes, secret agents, or the like who just happen to be able to sing or play really well: a very literal Five-Man Band. If the group also recently had a movie released, the cartoon may be a continuation of that, usually (when necessary) changing the names of the movie's characters back to the performers' real or stage names. Expect a Gratuitous Animal Sidekick to be added to the crew. Often, They Fight Crime! using The Power of Rock.

Note that shows using this format need not be based on an existing real-life band. Shows such as Josie and the Pussycats, Jem, or Jabberjaw all fall into this category. Also note that occasionally a song from such a "fictional" band will be a break out hit, such as "Sugar Sugar" by the Archies. And that's all without mentioning live-action series like The Monkees.

Part of the appeal of this format for animation studios is that the inevitable music sequence(s) always rely on Stock Footage, which saves on animation costs. Studios would sometimes even retrace the instrument-playing animation from a previous series, using the new characters.

Inevitably, fame being what it is nowadays, most groups end up declining in popularity shortly after the airing of these shows. This might be because getting one's own cartoon usually happens at the height of one's popularity, and one can only go down from there. It could also be claimed, however, that getting your own cartoon is a sign of "selling out." (Though one could argue that many of the examples listed never bought in.) Whether this is true or not, you gotta admit: If someone offered the opportunity for you to have your own cartoon, wouldn't you take it?

A form of Animated Adaptation. See also Celebrity Toons. Not to be confused with banned toons, which are a different matter entirely.