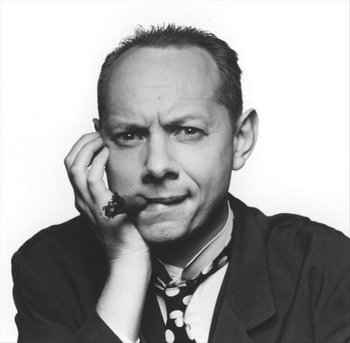 David Ian "Joe" Jackson (born August 11, 1954) is an English singer and composer originally from Staffordshire in The West Midlands but spent his childhood in Portsmouth, working in London for most of his professional life. He first came to notice in the New Wave era, although like his rough contemporaries Graham Parker and Elvis Costello he came from more of a pub rock than Punk Rock background. Since then he’s committed quite a bit of Genre Adultery, working in Synth-Pop, Jazz, and Classical Music, among other things.

NB: This Joe Jackson is not the father of Michael Jackson, nor did he play for the Chicago Black Sox. His debut album wasn't recorded by Roxette.

Don't you wonder what we'll find tropin' out tonight?