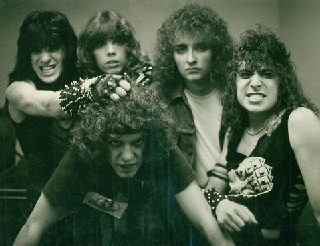 They'll use all their metal powers to give you a heart ATTAAAAAAAAACK!
"Black leather lords we're so tall and so proud
Warfare is our battle cry, shout it aloud!"
— "Warfare"
Advertisement:

Jag Panzer is a Power Metal band from Colorado that was founded in 1981 by Joey Tafolla, Harry Conklin, John Tetley, and Rick Hilyard, originally under the name "Tyrant". In 1983 it turned out that another band had already taken that name and they were forced to change it. They saw a poster depicting a World War II "Jagdpanzer" armored vehicle, decided that would be A Good Name for a Rock Band, and simplified it to "Jag Panzer". Harry Conklin appropriated "Tyrant" as his Stage Name. Initially heavily influenced by the New Wave of British Heavy Metal, Jag Panzer moved towards a more pugilistic, aggressive sound by the mid-80s and became one of the preeminent American power metal bands. Their first album, 1984's Ample Destruction was an instant underground classic, due to its massively heavy riffing, supremely badass lyrics, Conklin's even more badass vocals, and Joey Tafolla's insanely fast shredding, and became one of the most highly sought after metal records of all time. After that, Jag Panzer's fortunes took a turn for the worse; Harry Conklin and Joey Tafolla left the band (liner notes in a later release indicate that Conklin's departure may have been less than amicable). The band recorded a second album, Chain of Command, in 1987 with Bob Parduba on vocals and Chris Lasegue on lead guitar, but the record label ran out of money and the album was never released until 2004. Jag Panzer subsequently disbanded in 1988.

A reunion came in 1994, but the first fruits were nowhere near comparable in quality to their releases from the '80s; the '90s were a Dork Age for heavy metal, and Jag Panzer's third album, Dissident Alliance, reflected that. The style changed from power metal to Groove Metal, the production and songwriting took a serious hit, and, worst of all, instead of Harry Conklin's bestial howling, the album featured Daniel Conca delivering a vocal performance reminiscent of Phil Anselmo, only much worse. However, in 1997, Harry Conklin and Joey Tafolla rejoined the band, and Jag Panzer signed to Century Media and released The Fourth Judgement, bringing back the old style that had made them famous. From there, Jag Panzer has gone from strength to strength, releasing a string of excellent records, including five with Chris Broderick of Nevermore and Megadeth fame. Their most recent album, The Scourge of the Light came out in early 2011. Unfortunately, this proved to be their final album, as lead guitarist Chris Lasegue left soon after and on July 25, 2011, the band announced that they would disband again instead of seeking another guitarist. This changed in 2013, however, as they quietly scheduled several reunion shows and officially declared that they were back with Joey Tafolla returning in 2014.