The Band Minus the Face 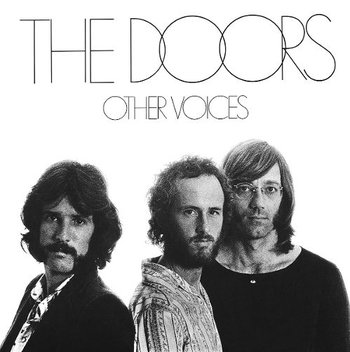 Who are these guys?note L-R: John Densmore, Robby Krieger and Ray Manzarek.
Advertisement:

When a musical group loses one (or more) of its key members, such as the lead singer or a similar Face of the Band figure, it usually breaks up — but not always. Occasionally, a band tries to continue without its "face", sometimes because it is legally obligated to.

Sometimes the group tries to replace the departed member, sometimes not. (If this happens, the new member is often dismissed by fans as a Replacement Scrappy.) Either way, more often than not, the result is bad, and the band rarely lasts more than one or two more albums. It can also lead to both Canon Discontinuity and Fanon Discontinuity, as performers and fans all try to forget the inferior post-face recordings ever existed. However, on rare occasions, a band gets lucky and averts the trope by attracting a new, larger audience.

Many bands both avert this trope and play it straight; it isn't uncommon for a band to survive the departure of one key member only to later see their popularity fade after the loss of a different member.

In a related phenomenon, sometimes a famous singer's backing band takes a "vacation" from its leader, releasing its own original material while still under the singer's employ. It's kind of a Solo Side Project, only involving more than one member of a group.

Compare and contrast the musical applications of Growing the Beard.