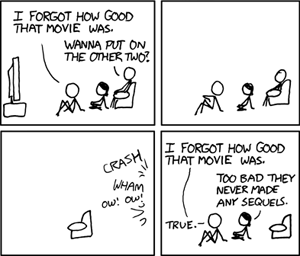 That's The Matrix they're talking about, in case you were wondering.note Now there's a fourth one.
Rainbow Dash: After lunch, we should probably start working our way back through the other books.
Quibble Pants: Whoa, whoa, whoa. There are no other books.
Rainbow Dash: Of course there are. Daring Do and the Trek of the Terrifying Towers, Daring Do and the Many Faces of—
Quibble Pants: Uh, p-please, please don't. Just don't even mention the titles. I-I'm not saying those books don't exist. I'm saying that I refuse to acknowledge them.
Rainbow Dash: Why?
Quibble Pants: 'Cause they're horrible!
— My Little Pony: Friendship Is Magic. "Stranger than Fanfiction"
Advertisement:

Fanon ("Fan Canon") Discontinuity is the act of fans mentally writing out certain events in a show's continuity that don't sit well, be it a single episode, a season-spanning arc, an entire season, or even an entire series. If a plot or ending rubs one the wrong way severely enough, fandom can just decide that the offending events never happened. On the series level, events may fall under Discontinuity because the show is perceived to suck at that point or decline too far in quality. Events also get "discontinued" for particularly screwing up the characters or setting, and a show that starts to suck will end up screwing things up eventually anyway.

In moviedom, Sequelitis is the most common cause of Fanon Discontinuity. Fans of a popular movie series commonly disavow all sequels beyond a certain point, typically the first or second movie. For example, the unofficial slogan of the Highlander fandom is, "There Should Have Been Only One".note It's a play on the franchise's famous quote of "There Can Be Only One," in case you're wondering. It is often supported and justified by the fact that the creators of the original had nothing to do with the sequels, so it is essentially not their work.

Sometimes discontinuity comes from not liking a very specific element while still enjoying everything else. When this happens, you've applied Broad Strokes to Canon. Not to be confused with Negative Continuity.

If the questionable elements are written out of canonicity by the creators themselves, then said elements entered in Canon Discontinuity territory, or, in less severe cases, are given a Discontinuity Nod. It gets ironic when a semi-inversion of this happens when the work is officially removed from continuity, but fans still like it or hate the "real" story meant to replace the old one and still treat it as canonical. If the creator just bashes it, then it's Creator Backlash. If the disliked elements later become more wieldy accepted as canon, be it getting a payoff or fix or other factors causing it to be seen better in retrospect, it's Vindicated by History.

Compare Fan Wank for when fans come up with rationales to make the disliked stuff better fits their likes. Contrast Fan Disillusionment for when it causes them to stop being fans of the work altogether as opposed to just pretending the disliked stuff didn't happen. See also They Changed It, Now It Sucks! and Let Us Never Speak of This Again.

Please note that this trope is highly subjective, more based on the fandom rather than the event itself. The visceral response to fanon discontinuity can baffle other fans who don't see the event as seriously, or even like the event. Just because an event or work has an example on here doesn't mean it's bad or that you're wrong for liking it. And just because a work is heavily disliked by the fanbase, it doesn't mean it should be listed here, because fans can dislike a work but still accept it as canon. This is a neutral catalog of a phenomenon in fandom, not a list of things we think are bad. That also means that you should only post examples where a significant portion of the fandom disregards an event, not just your own personal bugbears. Also, using this as a Pothole is generally rather rude, so please don't do it unless you want to use Canon Discontinuity instead.