Film / The Girl in Lovers' Lane 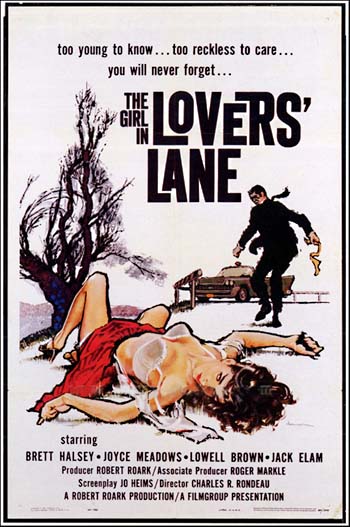 The Girl in Lovers' Lane is a 1959 B-Movie thriller directed by Charles R. Rondeau.

The story is centered on two drifters, the experienced Bix Dugan (Brett Halsey) and the young, naive Danny Winslow (Lowell Brown), who arrive in the small town of Sherman. Upon arriving, Bix starts up a relationship with an innocent young waitress named Carrie (Joyce Meadows), who's already being romantically pursued by creepy delivery man Jesse (Jack Elam). Eventually, Bix realizes he's going to have to leave Sherman soon, and attempts to break things off with Carrie. Things take a turn for the tragic, however, when, on the night Bix and Danny are supposed to leave, Carrie is murdered by Jesse.