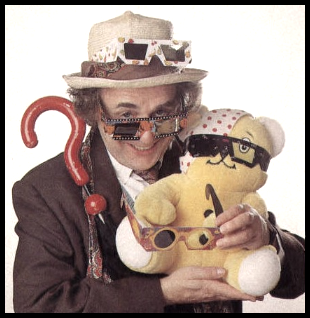 Cast an entertainer as the Doctor and you've got a master of comic relief. Cast a Scottish entertainer and you'll wind up with a humongous ham on bannock bread.
"There's still a part of me that believes what was great about Doctor Who in the early days was that you had a superhero who didn't wear his underpants on the outside of his trousers, who used his brain rather than his brawn."
Advertisement:

Sylvester McCoy (born Percy James Patrick Kent-Smith; 20 August 1943 in Dunoon, Scotland) is a Scottish actor. He came to prominence as a member of the comedy act "The Ken Campbell Roadshow". His best known act was as a stuntman character called "Sylveste McCoy" in a play entitled "An Evening with Sylveste McCoy", where his stunts included putting a fork and nails up his nose, stuffing ferrets down his trousers and setting his head on fire. He later became a pantomime performer for Vision On, a long-running 70's children show targeted specifically at deaf children, primarily as a denizen of a topsy-turvy world available through a magic mirror.

He's nowadays best known for playing the magnificently hammy Seventh Doctor on Doctor Who. By technicality, he's also the only actor to play two different incarnations of the Doctor, Fake Shemping for the recently-fired Colin Baker for the opening of "Time and the Rani". He also has the dubious distinction of being the last Doctor in the regular television series (he regenerated into Paul McGann at the start of the TV movie) until the revival in 2005. He was also the first Doctor to be webcast, voicing the 7th Doctor in the special "Death Comes to Time" (which was never intended to be particularly canonical, and has since been well and truly disproved).

Despite his tenure being cut criminally short by the network (he planned to stay on for just one more season before leaving, but the show got canned before his departing episode could even be decided on), he remained the canonical Doctor during the bulk of Who's cancellation years, long enough to appear in a lot (and we mean a lotnote We'd list all of them, but - and we're not exaggerating - we would, quite literally, be here until the end of time itself if we tried.) of Doctor Who Expanded Universe novels. Freed from the constraints of G-rated telly and providing the equivalent of Doctor Who methadone for the fans, the New Adventures books (barring a few significantly less canonical ones, like Lungbarrow) had an enormous lasting impact on future writers of the TV series; most notably Russell T Davies and Steven Moffat. A Tenth Doctor story, "Human Nature" (and its accompanying second part, "The Family of Blood"), was adapted from an NA book of the same name. McCoy still regularly enjoys new adventures in Big Finish Doctor Who. Because he is a darling and an entertainer at heart, McCoy is also notorious for having returned to the role often in less-than-legal circumstances, such as the Wilderness Years BBV Productions audio series about "The Professor & Ace" (as part of which Robert Shearman, later to write "Dalek" for the revived series, got his first crack of the whip at the Doctor), the fanfilm Gene Genius, or, as recently as 2019, Doctor Who: The Movie.

Has the dubious distinction of being the shortest actor to play the Doctor at 5'6", a record he now shares with fellow 5'6" Jodie Whittaker.

Other works featuring McCoy include 1985 miniseries The Last Place on Earth, in which he played a member of Robert Scott's doomed South Pole expedition. He tried out for the role of Bilbo Baggins in Peter Jackson's The Lord of the Rings. While that role went to Ian Holm, Sylvester McCoy would later get cast as Radagast the Brown Wizard in The Hobbit film trilogy. In 2017 he made a quite surprising break from his typical family-friendly roles as "The Old Man of the Hoy" in Sense8, an extremely paranoid Sensate whose first line is "Holy shit!"

Tropes associated with this actor's roles include: