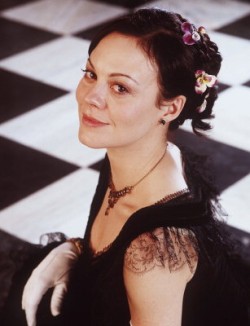 As is usual for a British actor, she began on the stage. Notable plays she was in include Uncle Vanya, Twelfth Night, and Anna Karenina. In 2006, she played Cherie Blair in The Queen. She was cast as Bellatrix Lestrange for the Harry Potter series but became pregnant, so the role was transferred to Helena Bonham Carter. Helen appeared as Bellatrix's sister Narcissa, though. She also played Lady Rosanna Calvierri in the Doctor Who episode "The Vampires of Venice". Helen also appeared in Interview with the Vampire, The Count of Monte Cristo, the 2007 TV movie of Frankenstein (as the gender-flipped title character), Fantastic Mr. Fox, Hugo, Skyfall, and Their Finest. Her television roles include Polly Grey, the Shelby family matriarch on the gangster saga Peaky Blinders, and Season Two Big Bad Evelyn Poole/Madame Kali on Penny Dreadful. In 2020 she appeared as PM Dawn Ellison on Roadkill.

She was married to Damian Lewis, with whom she had two children. Like many actors, they lived in both London and Los Angeles. She passed away from cancer on 16 April 2021 at age 52.