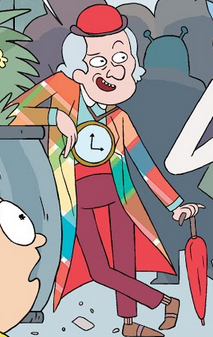 "It looks like I just showed up in the nick of—"
— Professor Tock, Rick and Morty (Oni)
Advertisement:

Doctor Who is a long-running British series, having run for over half a century. The Doctor is, of course, the character from the show and so has become a popular target to Homage or parody, especially since the Revival during the Turn of the Millennium.

Homages or parodies of the character will usually include:

Even the Doctor Who Expanded Universe has a few Expies of the Doctor due to the funkiness of copyright rules for licensed Doctor Who material as explained on its page, not counting other time travelers who the Doctor has inspired.