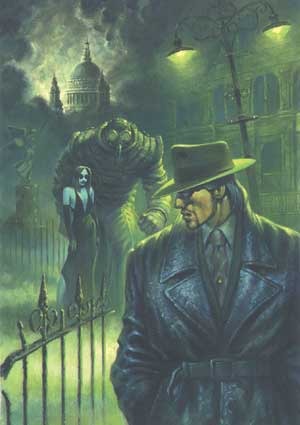 Time Hunter is a series of novellas and audiobooks, based around the adventures of two time-sensitives called Honoré Lechasseur and Emily Blandish, set primarily in 1949-1951. The concept originated in the Doctor Who Expanded Universe and would seem to take place within the world of Doctor Who.

Honoré and Emily were introduced in the Doctor Who Telos novella "The Cabinet of Light", published in 2003 in what could now be seen as a Poorly Disguised Pilot for the Time Hunter series. The series outlasted Telos' license from the BBC, meaning that all mentions of the Time Lord 'the Doctor' had to be replaced with (the more mysterious sounding) Dr. Smith. Fantom Films later released audiobooks of the "Time Hunter" series, rebranding the original pilot novella to fit.

Tropes used in "The Cabinet of Light":