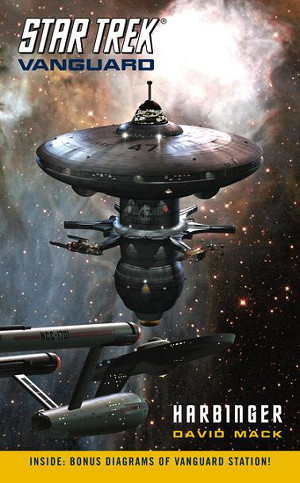 A series of books in the Star Trek Novel Verse, set in the mid-23rd century and so contemporary with Star Trek: The Original Series. The series was created by editor Marco Palmieri and author David Mack (and later co-written with Dayton Ward and Kevin Dilmore).
Advertisement:

The titular "Vanguard" is a Federation starbase located in a frontier region known as the Taurus Reach. Political tensions are running high as multiple governments attempt to uncover the secrets of the Reach, while the Sufficiently Advanced Aliens who once ruled it are awakening and angry at the intrusions....

The Vanguard cast consisted of:

There are also several short stories linked to the series in the Star Trek anthologies, including a Mirror Universe version of Vanguard in Shards and Shadows. The full-length novel The Sorrows of Empire also features the Mirror-Vanguard. In Tempest's Wake is an e-book designed to bridge the gap between the two time periods shown in Storming Heaven and serve as the final wrap-up of the series.

The story Distant Early Warning, a tale of the Starfleet Corps of Engineers, is also a part of the Star Trek: Vanguard arc.

Mack's 2022 TOS novel In Harm's Way is also a loose crossover with Vanguard. It serves as an interquel chronologically set during the events of Precipice (specifically about halfway through that book's one year narrative).

Vanguard has a sequel series of sorts, in Star Trek Seekers.

Finally, the events of Star Trek: Vanguard are important to Paths of Disharmony, a novel of the Star Trek: Typhon Pact series.