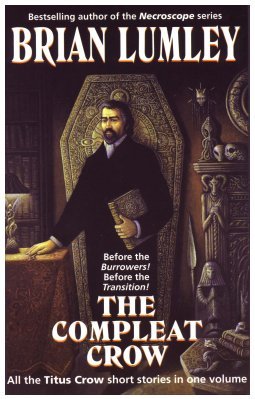 The Titus Crow series is a group of seven horror fiction books published throughout the 1970s by Brian Lumley. The books are based on H. P. Lovecraft's Cthulhu Mythos.

The titular character is an occult investigator (based loosely on Sherlock Holmes) who, accompanied by Henri-Laurent de Marigny, investigates the Cthulhu Mythos on behalf of the Wilmarth Foundation and later the Elder Gods. The series is notable for switching from Titus Crow as a protagonist fairly early to Henri and later Hank Silberhutte.

In a departure from many Cthulhu Mythos stories, Lumley's characters are not helpless victims of unimaginable forces which can drive humans mad by merely manifesting themselves. Instead, Titus Crow, his friend Henri-Laurent de Marigny, and other Lumley characters confront Cthulhu's minions in a series of increasingly large-scale encounters, in which humans, although outmatched, try to fight back. In a letter to the journal Crypt of Cthulhu, Lumley wrote:

"I have trouble relating to people who faint at the hint of a bad smell. A meep or glibber doesn't cut it with me. (I love meeps and glibbers, don't get me wrong, but I go looking for what made them!) That's the main difference between my stories...and HPL's. My guys fight back. Also, they like to have a laugh along the way."

Crow has been known to survive any number of encounters with monsters, although he may not always be able to defeat the creatures. For instance, he may fall unconscious upon running into a monster that kills anything that moves. Eventually, his series falls to his sidekick Henri-Laurent de Marigny when he Ascends to a Higher Plane of Existence.

The series would eventually produce spin-offs in the Dreamlands and Primal Lands series.

The books were released in the 1970s but have recently been re-released in audiobook form as narrated by Simon Vance and produced by Crossroad Press.