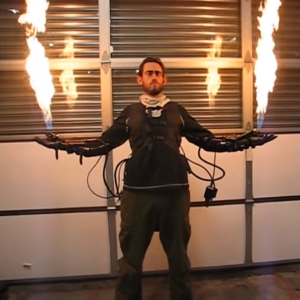 Within many works, the separation between science and magic can be blurred to deceive a bystander. In some cases, one may masquerade as the other. This is an important justification for many forms of Applied Phlebotinum.

In case you're wondering, here are all three laws.

The second law is partially covered by Beyond the Impossible.

Compare with Clarke's Law for Girls' Toys, Doing In the Wizard, First Church of Mecha, Machine Worship, Magic from Technology, Magic Tool, and The Spark of Genius. Contrast with Doing In the Scientist, Fantastic Science, and Magic-Powered Pseudoscience. Compare & contrast Magic by Any Other Name, Magitek, and Placebotinum Effect. See also Cargo Cult, Giving Radio to the Romans, God Guise, and Science Fantasy.