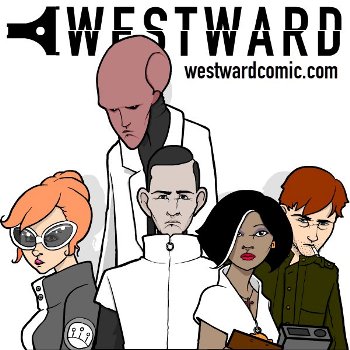 A Science Fiction webcomic by Elliot Toman, Westward is an old-fashioned Space Opera and Adventure story about humanity's first faster-than-light starship, the brave colonists it carries, the mysterious Martian scientist who guides it, and a cynical Intrepid Reporter who discovers a mystery of cosmic proportions at the heart of their mission.

Set in an Alternate History where the Cold War never ended and humanity reached Mars by the 1970s, Westward has a unique visual style, a wide cast of engaging characters, and a plot that takes its readers from dead alien worlds to mysterious spaceborne artefacts to a seemingly unremarkable Western town all without losing its impact, its sense of adventure, or its ability to keep everyone guessing and glued to the screen with every page.

, start from the beginning here

, or view the entire first episode (caution — may take a bit of time to load!) here