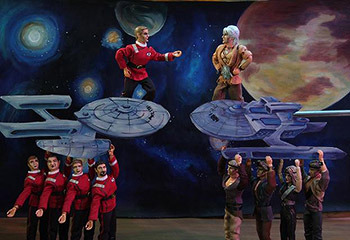 Le Ira di Khan, by Genetto Roddenberitti
"It'll be fabulous, believe me, Jerry. It's Grapes of Wrath in outer space! Oh, it's got heart, it's got laser battles, it's got a timely message of interstellar poverty—!"
— Lorne, Angel ("Life of the Party")
Advertisement:

Space Opera refers to works set in a spacefaring civilization, usually set in the far future or A Long Time Ago, in a Galaxy Far, Far Away.... Technology is ubiquitous and secondary to the story. Space opera has an epic character to it: the universe is big, there are usually many sprawling civilizations and empires, there are political conflicts and intrigue. The action will range across part of a solar system at a minimum, and more commonly will extend over large tracts of a galaxy or several. It frequently takes place in a Standard Sci Fi Setting. It has a romantic element which distinguishes it from most hard science fiction: big love stories, epic space battles, oversized heroes and villains, awe-inspiring scenery, and insanely gorgeous men and women.

Historically, it is a development of the Planetary Romance that looks beyond the exotic locations that were imagined for the local solar system in early science fiction (which the hard light of science revealed to be barren and lifeless) out into an infinite universe of imagined exotic locations. Planetary Romance was more or less Heroic Fantasy In Space. While works such as John Carter of Mars by Edgar Rice Burroughs were pure Planetary Romance, Buck Rogers and its imitators had essentially codified the Space Opera concept in the popular imagination by the late 1930s, though the earliest strips took place on an After the End future Earth. (Flash Gordon, at least in the classic Alex Raymond era, remained resolutely Planetary Romance, tied to the planet Mongo.)

Expect to see a dashing hero cavorting around in a Cool Starship, Green Skinned Space Babes, Crystal Spires and Togas civilizations full of Space Elves, Wave Motion Guns capable of dealing an Earth-Shattering Kaboom on a daily basis, and an evil Galactic Empire with a Standard Sci-Fi Fleet, including an entire universe full of beat-up mechanical objects capable of being resurrected with Percussive Maintenance.

Note that this is quite different from the original definition of space opera, which was originally a derogatory term, following "horse opera" (cheap westerns) and "Soap Opera" (so named because soap operas began as hour-long ads for soap), which requires no explanation. The phrase was coined in 1941 by Wilson Tucker to describe what he called "the hacky, grinding, stinking, outworn space-ship yarn". (It's said that before 1975 or so, the only author who ever intentionally set out to write a space opera was Jack Vance, who wrote a novel, Space Opera, literally about an opera company in space.)

Via semantic drift, well-regarded works such as the Lensman series are today held up as prime examples of Space Opera. As more authors and writers came to embrace the style, the term came to lose many of its negative connotations. Assisting that process were writers who regarded all tales of action and adventure in space as bad, and so tried to pejoratively label it all "space opera"; they succeeded with the label, but not with keeping it pejorative.

The ideal space opera, as described by Brian Aldiss, contains most if not all of the following criteria:

Star Wars is inarguably the most famous modern example of space opera. (Indeed, The Empire Strikes Back may have shifted "space opera" from insult to a more neutral genre descriptor, due to the involvement of veteran sf writer Leigh Brackett.) In Star Wars, technology is either magic (the Force) or jazzier versions of today's gadgets (blaster rifles, hovercars, space ships). Any Star Wars character (evil emperor, farmboy, princess) would feel at home in a thick fantasy novel, in part because editor-publisher Lester del Rey derived the "epic fantasy" template partly from Star Wars and partly from The Lord of the Rings, though also because these works borrow from the same source of Jungian imagery.

The genre is useful for long story and character arcs but also expensive to film, unless rendered in animated form, like countless anime series.

Space Opera is defined above all by one thing: hard science will never be allowed to get in the way of storytelling. How exactly the hyperdrive works to jump from planet to planet isn't important. The focus is on the characters and themes of the overarching story. For the same reason, certain common tropes like Planet of Hats and Single-Biome Planet tend to appear frequently in Space Opera (though harder science fiction is by no means immune to them). For storytelling purposes, interstellar civilizations are analogous to countries, and planets analogous to cities. Space Opera is an Earth-sized story lifted onto the galactic scale. The logistical challenges that would actually result from this are safely ignored.

While hard science fiction defines itself in part in opposition to space opera (and vice versa), in recent years, however, there has been a trend towards incorporating hard science fiction elements into space opera, as in Starship Operators, the 2000s Battlestar Galactica, Firefly and especially Alistair Reynolds' Revelation Space. In fact, "New Space Opera" has gained some currency as a term referring to works that combine fast-paced adventure plots with some degree of hard SF rigor.

See also Space Western, Two-Fisted Tales, Pulp Magazine, and Wagon Train to the Stars. In many ways, this is the science fiction equivalent of High Fantasy.

Note that while many more famous space operas go to the "ideal" side of the Sliding Scale of Idealism Versus Cynicism, more recent ones are harder and more cynical: Babylon 5, Battlestar Galactica and Firefly being most prominent in Live-Action TV.

Sadly, there aren't too many actual Operas set IN SPACE! One famous example in the music world, however, is Swedish composer Karl-Birger Blomdahl's Aniara (1959), based on Martinson's poem (1956).