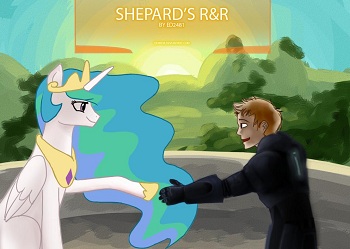 One legend meets another.
Advertisement:

In the year 2186, the Reapers returned for the harvest, and brought the galaxy to its knees. Thanks to the diplomacy and action of Commander Shawn Shepard note  Male Shep, Spacer background, Vanguard, Romanced Tali, Saved the Krogan, Geth and Quarians at peace, Destroy Ending, Kaiden is Virmire Survivor, completed all DLC , every species threw aside their differences and banded together to fight the ancient menace, but the onslaught was relentless and defeat was almost certain. However, the races pooled their resources to create a mysterious weapon, the Catalyst, and made a final, desperate push to activate the weapon. At great cost, the weapon was fired, and Shepard destroyed the Reapers at the cost of all synthetics of the galaxy. Decimated and weary, the galaxy can finally focus on rebuilding.

A few weeks later, Commander Shepard awakens from his coma after surviving the near-destruction of the Catalyst. His extended sleep was all the rest he was getting, as the galaxy has discovered a mysterious new race of equines with mysterious powers. With the help of his old companions, Ambassador Shawn Shepard journeys to the planet Equus to make sure the Equestrian's welcoming to the galactic community goes as smoothly as possible... and secure the Serenity's systems resources for the Council.

This crossover Fan Fic is a collaboration between ed2481 and Loyal2Luna, and can be found here

. Sadly, the story is on indefinite hiatus, due to the author losing his interest in writing MLP stories.

This Fanfic presents examples of: