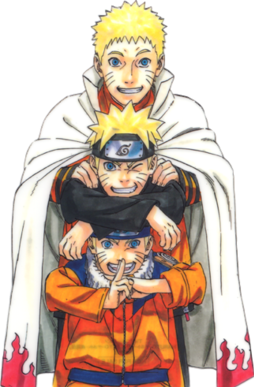 He got taller with age, believe it!
"Hey, when the hell did you get taller than me?"
— Kamina to Simon, Tengen Toppa Gurren Lagann
Advertisement:

Puberty can do weird things to kids. Hair starts growing everywhere, attraction to other people starts popping up, and, well, you grow up. Some people don't just grow up, though; they get BIG.

This trope describes characters who are seen for the first time after an extended period or time skip, and have grown a few inches up (or out, or both, or a LOT). It usually happens to the guys, and is usually meant to accentuate the amount of time that has passed: the little kid you used to noogie is now big enough to knock you out with one punch. Sometimes, they replace The Big Guy of the last generation. Can be used as a gag if the smallest kid is the one who grew the most.

Pint-Sized Kids tend to end up under this trope due to the major size gap between them and grownups. Tiny Schoolboys, however, aren't always so lucky. Compare to She Is All Grown Up and Breast Expansion. Contrast Comic-Book Time.