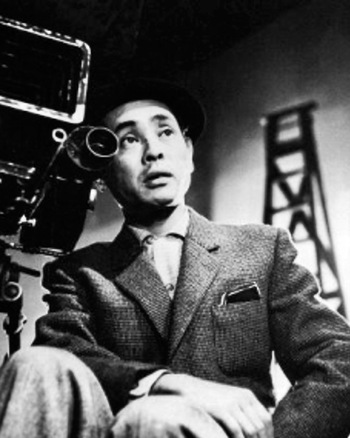 Keisuke Kinoshita (木下 惠介, December 5, 1912 – December 30, 1998) was a Japanese film director, one of the foremost figures of Japanese cinema in the post-World War II era.

He was born in Hamamatsu in the largest Japanese home island of Honshu. He literally ran away from home to work in the Japanese film industry, but was dragged back by his family, before they eventually allowed him to leave for good. He got a job at the Shochiku studio which was temporarily interrupted when he was drafted in 1940 and sent to China to fight in the Second Sino-Japanese War.

He was discharged after a year and sent back to Japan, where he rejoined Shochiku. He made his directorial debut in 1943 with The Living Magoruku. The following year Kinoshita, a liberal who was against the war, made one of the most remarkable subversive films of all time with Army. That film managed to sneak in an anti-war message into a project which had actually been commissioned by the Imperial Japanese Army as a celebration of Japanese martial virtues. The end of the war and the American occupation removed the censorship, and Kinoshita made more overtly anti-war films like Morning for the Osone Family and Twenty-Four Eyes.

Kinoshita was gay, and gay themes are subtly alluded to in some of his movies, notably Farewell to Spring, which is about the bonds between five young male friends and has been called Japan's first gay film. After the mid-1960s his formerly very productive pace slowed down, but he kept working, directing his last film in 1998.