A Birthday, Not a Break 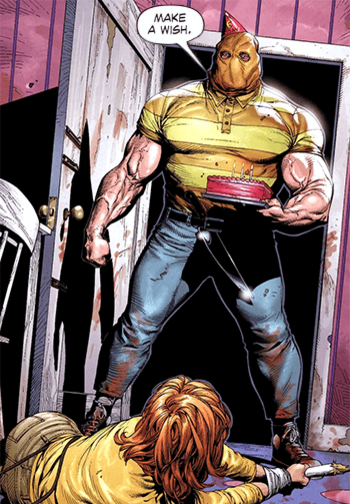 Whether or not you want the cake, you're getting a slice.
"Oh, man. Not on my birthday."
— Lilo Pelekai, Lilo & Stitch: The Series ("Amnesio")
Advertisement:

Something awful happens. The lovers finally break up, the heroes get captured, a beloved character dies, The Bad Guy Wins... and after the smoke clears, one of the characters suddenly remembers that today is their birthday.

Used to heighten the dramatic irony of something so tragic happening on what is supposed to be a happy day, and symbolizing how the character(s) will never be the same.

Alternately the character is aware it is their birthday, in fact, there's a party just for them. But during the party there is an attack, a conversation between two characters, a revelation, etc. that disturbs (and often ends) the party. Basically the party is used as a reason to have all the characters be in the same place. That way they are conveniently together when the supervillain attacks instead of needing to be called, especially crucial if the characters are adults with day jobs or secret identities and wouldn't naturally be spending time together without a cause. This party is why the people who have been avoiding each other will finally have to talk. This gathering of people is how the secret comes out (someone reveals it not knowing it's a secret or someone being drunk both common causes) and the revelation has more of an impact because now everyone knows not just the few people it effects.

Compare/Contrast Ironic Birthday, which is when the bad thing in question has to be kept a secret, and the character in question doesn't remember their own birthday until the party. Not to be confused with Birthday Party Goes Wrong, where it is the party itself that goes south rather than that something unrelated to the party causes trouble. Related to Dangerous 16th Birthday, Worst Wedding Ever (when Played for Drama) and Horror Doesn't Settle for Simple Tuesday (when the horrific events happen because it's a special day, birthdays included.) See Shoddy Shindig for boring parties.

Murray the Cop had a rough day on his birthday. He arrested DJBJ for dancing in front of the kids in his undies, then arrests Davo Dinkum for theft, and Rocky had gone a step to far, making Murray upset, so he arrested him.

Murray the Cop had a rough day on his birthday. He arrested DJBJ for dancing in front of the kids in his undies, then arrests Davo Dinkum for theft, and Rocky had gone a step to far, making Murray upset, so he arrested him.