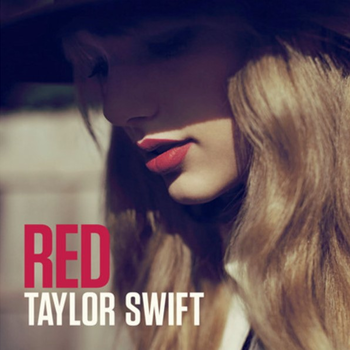 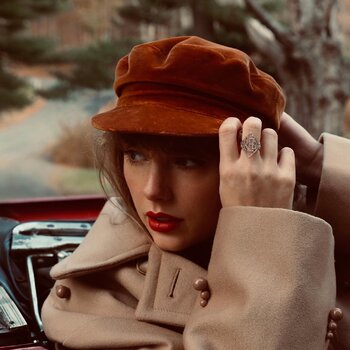 to see the logo for Red (Taylor's Version) on Wikipedia
"All the different emotions that are written about on this album are all pretty much about the kind of tumultuous, crazy, insane, intense, semi-toxic relationships that I've experienced in the last two years. All those emotions—spanning from intense love, intense frustration, jealousy, confusion, all of that—in my mind, all those emotions are red."
— Taylor Swift
Advertisement:

Red is the fourth studio album by American Singer-Songwriter Taylor Swift. It was released on October 22, 2012.

The album marks the real beginning of Swift's shift away from her country roots toward more mainstream pop. It straddles genres—twangy enough to be played on the country station, and rock enough to fill stadiums, yet streamlined and upbeat enough to debut at #1 on the Billboard 200 and make Swift the first female artist with two albums which sold over a million copies in the first week.

Lyrically, Red explores Swift's usual themes of love, heartbreak, and living life to the fullest. Those emotions, as Swift explained in a live chat and in the liner notes, as well as in the title track, manifested for her in a bright, multifaceted red.

A re-recording of the album, Red (Taylor's Version), was released on November 12, 2021 as the second in Swift's series of re-recorded albums produced as a counter measure to Scooter Braun's purchase of the masters to her first six albums and his later subsequent sale of them to Shamrock Holdings under the conditions that he and his company Ithaca Holdings will continue to profit off of them.

The song "All Too Well" and its accompanying short film have their own page.

Not to be confused with the King Crimson album.

Preceded by Speak Now, succeeded by 1989.

"I knew you were troper when you walked in":